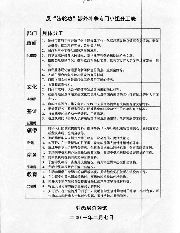 "Special Group Meeting Record" dated February 23, 2001 shows the work summary of every division, recording in detail how every special group implements tasks and puts the persecution of Falun Gong into effect.

These secret documents disclose how the CCP controlled and influenced the local Chinese people and governments, and spread propaganda slandering Falun Gong within the political, economic, cultural and educational fields via embassies and consulates in foreign countries. They are evidence of the CCP persecuting Falun Gong outside of China.

The entire document, in the form of a table, in a very detailed, systematic and planned manner, discussed in all aspects how to take various approaches to suppress Falun Gong overseas and extend the CCP's policy of suppressing Falun Gong inside China. The divisions involved in the Australian Consulate General included the Political and Research Division, Culture Division, Visa Office, Overseas Chinese Leaders Division, and the Commerce and Education Divisions. Each division had a particular person-in-charge and particular task arrangement.

The secret document also shows that the CCP's major tactic in exporting the persecution overseas is hate propaganda and defamation, designed to instill hatred of Falun Gong among mainstream society, the media and politicians in the West. The CCP also makes use of and supports overseas student associations and pro-communist groups, which are special agent organizations to spread hatred to Chinese communities.

In another document entitled "Special Group Meeting Record" dated February 23, 2001, each division in its work summary, recorded in detail how each special group implemented its tasks and put them into effect. At the top right corner of the document, Deputy Consul-General Shi marked, "Read!" dated on February 26. Consul-General Liao signed the document the same day, "Read" and approved it for all group members to read. 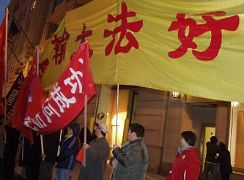 The secret document clearly recorded how the CCP uses overseas Chinese students to work as special agents and help the CCP persecute Falun Gong, and the international community is paying more attention to this issue.

In the to-do list of the Chinese Consulate in Sydney, the task for the education division, led by An Yufeng, involved spreading materials slandering Falun Gong to overseas Chinese students. Task Number Six on the list said, "Find a few trustworthy students to help us understand the situation." Task Number Seven says, "On special days (when Falun Gong has activities), mobilize students to oppose their actions and fight with them. The students may help local Chinese people to make banners and display boards to criticize Falun Gong."

Recently, a Chinese student at the University of Queensland in Australia posted a letter on the Internet questioning whether the Association of Chinese Students and Scholars serves as CCP special agents. Former President of the Association, Xu Bin, replied on July 16 saying, "This association is a civil organization. The Chinese government provided me and this organization certain financial support so we can better mobilize local Chinese students to fight various wrongful and anti-government ideas in our daily activities..."

On the website of the Chinese Consulate in Australia, in an article entitled "Meeting of the Association of Chinese Students and Scholars in Queensland in 2005 a Success" published on May 11, 2005, Counselor Zhang Shuanggu praised the Queensland Chinese students for helping the consulate process "emergency situations" and asked the Association to help welcome important visitors from China.

Chen said similar Chinese associations exist in almost all universities around the world. They monitor democratic activities, Falun Gong, and activities of dissidents in the universities and report to the Chinese consulates and embassies as soon as possible.

In the group meeting record, the second achievement in the consulate's bi-weekly report states, "On February 8, Deputy Consul-General Shi met with General Manager Wu Chenghuan and Chief Editor Wu Huiquan of the Australian Chinese Daily. Consul Shi expressed his concern about the newspaper running Falun Gong's advertisements. The newspaper representatives expressed that they would carefully take care of this issue and publish articles recommended by us. We recommended a dozen articles from People's Daily and Xinhua News Agency to the Chinese media."

Chen Yonglin disclosed that the CCP controls overseas Chinese media by providing financial support. The money goes to the news media through Chinese companies advertising with them. Chen said the manager of the Australian Chinese Daily, after a Chinese company dropped its advertisement on the newspaper's first page, compromised with the Chinese consulate. The newspaper stopped publishing Falun Gong's activity announcements and instead published anti-Falun Gong articles. The newspaper also recommended other Chinese media articles from the CCP mouthpiece such as the People's Daily. The media in China also works directly with overseas Chinese media. For example, Xinmin Evening News in Shanghai has a special relationship with the Australia Singtao News. Singtao News directly uses articles from Xinmin Evening News, which are Xinhua news articles, basically.

The first item on the work list for the Political Research division is to work on the state and city governments and the mainstream media, including sending them letters from the consul-general, news articles from the consulate, promoting government officials and congress members to visit China.

In the group meeting record, the first achievement in the bi-weekly report was, "Consul-General Liao visited with Governor and Vice governor of the New South Wales State... Mayors of City of South Sydney and looked for an opportunity to work on Falun Gong."

Chen Yonglin said there are two ways to please the western political figures: one is to provide the high level officials benefits, such as touring China for free. The other is to provide scholarships to children of high level officials under the table for them to study and live in China for free. "Without any open competition, it is in fact bribery."

Chen said that CCP officials even put pressure on western political figures. Chen said, "For the western officials who help Chinese dissidents, the CCP will put them on record for 'sabotaging relationship between the two countries.' If one day these western officials want to go to China, the consulate will give special review to their application or deny their visas."

Chen Yonglin said, "Control of the Chinese community is the CCP's consistent foreign policy. It has been a 'painstaking effort' over the past decades, and has a certain scale. It is a pyramid-like structure and system. They manipulate Chinese people in the name of 'unite overseas Chinese.' "

In 2001, the Chinese Association of Canada organized an open forum in Toronto's Chinatown to slander Falun Gong. Chairman Wu Zhuosheng hosted the activity. Executive chairman of the Association, Chen Bingding, and Chinese Consul General at the time, Zhou Xingbao, were the main speakers.

The secret document of the Chinese Consulate that Chen Yonglin exposed was drafted in early 2001, when the "Tiananmen Self-immolation" incident staged by the CCP had just occurred in Beijing, China. The CCP spread hate propaganda both inside and outside China at the same time. It apparently shows that the two incidents were related.

It has been reported that in the early stage when the CCP and Jiang and Luo group suppressed Falun Gong, the persecution policy did not gain favor with the public, and even many officials in the CCP's Politburo opposed it. So Jiang and Luo started using the media to fabricate lies and frame [Falun Gong] from 1999 to 2000. The voices resisting the suppression among ordinary people and high-ranking officials were quite strong, and the persecution policy was hard to sustain.

After plotting the 'Self-immolation' case, and under forceful propaganda of the CCP's mouthpiece media, the CCP created an upsurge of hatred against Falun Gong across China, so that the persecution was able to be extended and even expanded overseas.

With the assistance of the hate propaganda, the CCP escalated the persecution both inside and outside China after 2001. According to the Minghui/Clearwisdom website, the verified death toll of Falun Gong practitioners as a result of the persecution had a rapid increase in 2001. Jiang's genocidal policies against Falun Gong came out one after another, such as "defame their reputations, bankrupt them financially, and destroy them physically," and "beating them to death is counted as suicide."

According to the World Organization to Investigate the Persecution of Falun Gong (WOIPFG) and other organizations, the CCP's atrocities of harvesting organs from living Falun Gong practitioners in concentration camps also appeared on a large scale around 2001. Organ transplants in mainland China increased significantly at that time.

At the same time, outside China, cases of Falun Gong practitioners' being harassed and assaulted by the CCP also greatly increased. The assailants were rogue special agents the CCP directly sent and hired, and people who were misled by the CCP's hate propaganda and did not know the truth.

In addition, in the years after 2001, the international media extensively reported that when the head of the CCP visited Western countries, the CCP provided the visiting countries a blacklist of Falun Gong practitioners, and spread messages slandering Falun Gong to mainstream society. As a result, Falun Gong practitioners who held peaceful protests were treated unfairly. All this has a direct connection with the CCP's fabrication of rumors and framing Falun Gong to overseas media, mainstream society and the Chinese community.

Due to the CCP's Brainwashing, Many Personnel in Chinese Consulates Do not Know the Facts

The Chinese Consulate's secret document is full of slander and defaming texts. Chen Yonglin said that inside CCP consulates, many officials who implement the persecution of Falun Gong do not understand Falun Gong, nor are they clear about the true situation of the CCP's persecution of Falun Gong. They even do not know the truth about the "Tiananmen Self-immolation" incident staged by the CCP in 2001 in an attempt to frame and slander Falun Gong.

Chen Yonglin said, "Like many Chinese people nowadays, officials in consulates also have a typical mentality, that is, if this matter has nothing to do with them, they put it aside. Their apathy and indifference keep them from learning about the facts of the persecution of Falun Gong. They are even gullible with respect to the Communist Party's lies and propaganda."

Chen Yonglin stressed that the Communist Party system is the root cause of this situation. It destroys the cultural spirit of the Chinese nation. Brainwashed by the Communist Party's culture, atheism, materialism and a philosophy that advocates struggle for a long period of time, people become very selfish. They only care about their own interests, and show no concern for the safety of others.

He said that the attitude of officials in the CCP's overseas embassies and consulates toward the Falun Gong issue also reflects this indifference, but that is also the path an individual chooses to walk. Siding with good or evil is also their own choice.

(Reproduced from The Epoch Times)