On July 30 2007, the Yilan County Council passed a bill that strongly condemned Hong Kong authorities who used a "blacklist" provided by the Chinese Communist Party (CCP) to prevent Falun Gong practitioners from entering Hong Kong. Falun Gong practitioners were barred from boarding airplanes headed for Hong Kong, many were refused visas and some Taiwanese Falun Gong practitioners who traveled to Hong Kong shortly before the tenth anniversary of Hong Kong's handover to China were violently deported. Immediately after these events, two council members, Mr. Hongmou Wu and Mr. Jinling Chen, introduced this bill at the County Council temporary meeting, and recommended that the county government pass it on to the central government, to ask for an apology from Hong Kong and a promise that this will not happen again. The bill was passed with 24 votes from different parties. 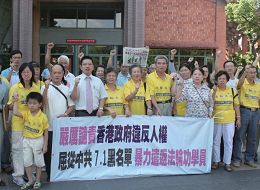 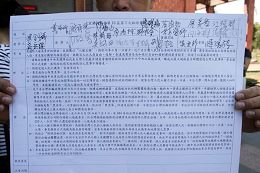 During interviews, the county leader and several county representatives condemned the CCP's lack of respect for rule of law. Mayor Guohua Lu said that this was ironic and disheartening, considering that Hong Kong always emphasizes its democracy and freedom. He urged the Hong Kong government not to comply with CCP pressure, and to persist toward democracy and freedom. At the same time, the CCP must realize the world trend and move toward respecting human rights. 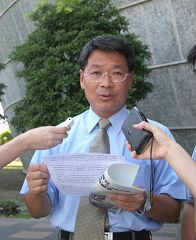 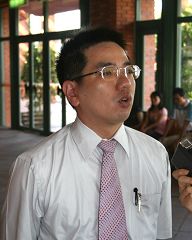 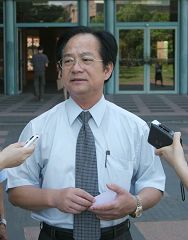 Representative Chongyuan Jiang said that he was grieved to see that Hong Kong, known as a democracy, followed the CCP's orders to do such despicable things. He emphasized that Falun Gong practitioners were mistreated, and as their representative, he must stand with Falun Gong to denounce the CCP. "We must be persistent with our dream," he said.

Representative Futian Wu said that the CCP is an anti-democracy dictator. It forbids free assembly for fear of infringement on its control. Actually, Falun Gong is only a meditation practice that improves people's health and minds. Representative Wu said that if the CCP does not stop suppressing democracy and destroying moral standards, it will collapse soon.

Falun Gong practitioner Shuling Liang was forcibly deported from Hong Kong. She arrived at the Hong Kong airport on June 29, but was not allowed to enter the country. The next day, she saw the Hong Kong police using rugs to wrap and carry out Falun Gong practitioners during forced deportation. On July 1, she saw over 100 policemen forcibly carry away about 50 Falun Gong practitioners to an office, after which they deported them on a returning airplane. She said, "The policemen in the airport were just carrying out an order. Behind the incident, the real culprit is the Chinese Communist Party." She also called on the Taiwanese people to be aware of the CCP's human rights violations.

Falun Gong practitioner Fusheng Lin said he had traveled to Hong Kong many times before, but this time he was deported back to Taiwan. It is a regression away from Hong Kong's freedom of belief and human rights. He hopes that more people will become aware of this fact and condemn these acts committed by the Hong Kong authorities.

A teacher at the Luodong Advanced Industrial School, Mr. Wenzhong Zeng said he had entered Hong Kong many times with legal travel documents before. This time, he booked a seat to Hong Kong with Cathay Pacific Airways. But when he arrived at the airport on the evening of June 30, he was told that his name was on a "blacklist" so they couldn't assign him a seat. He said he planned to join the activities in Hong Kong to tell people that Falun Gong practitioners were being persecuted by the CCP and even their organs were harvested by the CCP and sold for profit. He wanted the Yilan County and the public to be aware of Hong Kong's illegal deportation and for all to work together to protect human rights.

Another Falun Gong practitioner from Yilan County said that over 240 Falun Gong practitioners were deported from Hong Kong in the past six years. The Hong Kong government violated human rights and ignored the strong condemnation of these acts by the rest of the world. Human rights and freedom of belief is a universal value for all nations. When facing such crimes against humanity, any silence and appeasement is the same as siding with such evil behavior. The purpose of Yilan County's bill to denounce the CCP and the actions of the Hong Kong government is to call on all citizens to protect basic human rights and uphold justice.