On August 25-26, 2007, Falun Gong practitioners in the San Francisco Bay Area held a truth-clarifying activity at a Mid-autumn street fair held in Oakland's Chinatown. They wanted to help more people learn about Falun Gong. Many visitors learned about Falun Gong during the two days of the fair. More and more people asked for information about practice sites in their area. Several people from mainland China stated their renouncement of the Chinese Communist Party (CCP) and its affiliated organizations. 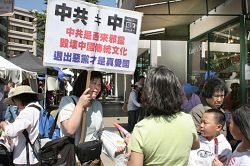 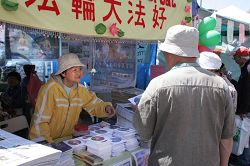 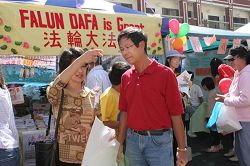 Visitors appreciate the paper lotus flowers with the words, "Falun Dafa Is Good"

It was very crowded during the two days of the festival in Chinatown. The Oakland Street Fair is a major late summer fair with over 200 booths attracting a crowd of 200,000 visitors. Many practitioners took part in the activities. They distributed the "Minghui Weekly" overseas edition, brochures about Falun Gong, and copies of the Nine Commentaries on the Communist Party.

Many people visited the Falun Gong booth to ask for informational materials. One man took a copy of the Nine Commentaries on the Communist Party. He said that he had learned about the CCP's brutal persecution of Falun Gong practitioners, and knew that the CCP harvested organs from living people and then sold the organs to foreigners. He said, "What the CCP is afraid of the most is that Chinese people will learn the truth." He expressed his support for Falun Gong practitioners' efforts against the persecution.

People from mainland China also visited the Falun Gong booth, and asked practitioners to help them quit the CCP and its affiliated organizations. An older man saw a practitioner holding a placard reading, "The CCP Is Not China," and expressed his strong support. He said that the CCP is terrible. He said that a family member who was director of the Food Bureau was killed during the "Great Cultural Revolution" and had his property ransacked.

Bay Area resident Lisa was very pleased to find the Falun Gong booth. She is interested in Taoism in China. She discovered that Falun Gong includes connotations of both the Tao School and the Buddha School, and can also help her abandon bad habits and reduce stress. She was very excited. After learning where she could buy the book Zhuan Falun, she left with great satisfaction.

A man living in Oakland said that he received a flyer from a Falun Gong practitioner last year when he visited Beijing, so he already knew about the CCP's persecution. He said that on the surface, China looks prosperous and is flourishing, but the persecution is still going on. China seems to wear a big mask; the media is controlled by the CCP and only allows people to access what it wants them to read and see.