(Clearwisdom.net) The 2007 UK Falun Dafa Cultivation Experience Sharing Conference was held in the capital city of London on August 26, 2007.

At the conference, which was decorated simply yet solemnly, Chinese and Western practitioners from diverse age groups and backgrounds who started cultivation from different periods and are involved with various projects shared their experiences on an array of topics, such as improving the character to resolve conflicts at home, at work or in society, clarifying the truth to stop the Chinese Communist Party's (CCP) persecution of Falun Gong practitioners, cultivating in the period of Fa rectification, letting go of the attachment to comfort, finding and getting rid of the fundamental attachment, keeping righteous thoughts throughout projects, denying the old forces' arrangements to coordinate well, etc. 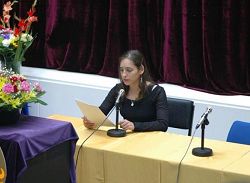 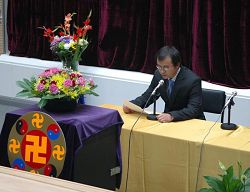 Young practitioners talked about characteristics of their cultivation at school and in life through each age group, while elderly practitioners spoke about their improvements through different forms of tribulation.

Some Chinese and Western practitioners touched upon overcoming reservations and the attachment to comfort, utilizing cultivated righteous thoughts and personal strength to take initiative in clarifying the truth to friends and media to promote Falun Gong and tell more people about this persecution. They emphasized the importance of group Fa study and sharing for the improvement of individuals and the group as a whole.

Two practitioners who suffered the CCP's persecution in mainland China exposed the CCP's atrocious evil nature through their own experiences. They stressed letting go of the Party culture and attachment to comfort to better expose the evil overseas in normal western society.

Those who took part in the 24-hour vigil in front of the Chinese Embassy and exposed the CCP's crimes in Chinatown reported a steady increase of people who learned the truth through the past few years. They also shared their cultivation experience in this process.

Several practitioners who participated in various projects described how to balance a multitude of projects, help newcomers, be compassionate, co-ordinate with righteous thoughts, and persevere in Fa study and sending righteous thoughts under pressure in the Fa rectification period. They highlighted the importance to tolerate and encourage each other to improve as one body so that more people can learn about Falun Gong and the truth about the persecution in order to assist Master in Fa-rectification.

Heart-felt words of self-criticism were well received. Many shed tears and applauded enthusiastically. The atmosphere of the conference was solemn and peaceful.

The UK Falun Dafa Cultivation Experience Sharing Conference has been held once a year since 1999.