Interview with a Skilled Vocalist: What is the True Meaning of Life? (Part B) (Photos)

(Clearwisdom.net) During the interview, Ms. Han Suqiu spoke in fond terms of her life as a Falun Gong practitioner. Falun Gong answered her questions about life. Falun Gong has also been guiding her in her quest to return to innocence and truth. As her cultivation progressed, her health and moral values improved significantly. 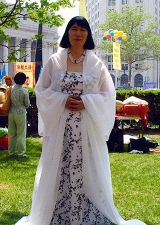 Everything changed when Jiang Zemin and the Chinese Communist Party (CCP) launched the persecution of Falun Gong. They poured China's resources into suppressing and blaspheming Falun Gong. Hate propaganda packed with lies and deceit about Falun Gong saturated China. Chinese police were arresting Falun Gong practitioners throughout the nation. Practitioners felt as though the sky had collapsed.

Did Ms. Han Suqiu hold the thought of giving up her belief in Falun Gong?

Violence will not Destroy a Cultivator's Faith

Ms. Han said that she never imagined that the CCP and Jiang Zemin would suppress Falun Gong.

"I survived the CCP's numerous past political movements. My instinct told me that the CCP had launched another political movement that would become the greatest disaster for the Chinese people," Han said. "Given the long history of CCP political movements that murdered and persecuted many Chinese people, I was fully aware of what was about to happen to me. I clearly understood what would happen if I should persevere in practicing Falun Gong. I was in agony. My mind asked if I should insist on practicing Falun Gong. Each time I looked at Teacher's photograph, I was in tears. But when I calmed down, I asked myself, 'How can I easily give up what I had looked for all my life?'"

Han added, "My body and soul had been cleansed by the Fa. If I should give up practicing Falun Gong, I would lose my health again and my moral values would sink to the level of an ordinary person. I would rather die than to see that happen."

She continued, "It's difficult for non-practitioners to imagine the kind of pressure I faced. I battled in my mind for some time. But, after much deliberation, I became all the more steadfast in my faith."

Remembering the Horrifying Experiences of the CCP's Political Movements

Ms. Han said, "I experienced almost all political movements since the CCP came to power. My family was wealthy and lived in Tianjin when I was little. During the Three-antis Campaign (1951) and Five-antis Campaign (1952) (these consolidated Chairman Mao's power base by targeting political opposition and capitalists, especially wealthy capitalists), the CCP arrested my father and tortured him in prison. He suffered the torture method tiger bench. My father could withstand when the torturers placed three bricks under his lower legs, but when they added the fourth brick, he passed out in pain."

"Party henchmen ransacked our home and kicked us out. We became destitute overnight. My father lost the ability to walk due to the torture, so we put him in a wheelchair. My mother and I cried, but silently for fear of being heard."

"Since I was little, I was discriminated against because my father was a wealthy capitalist. During the Cultural Revolution, our family became a target again. CCP goons confiscated our home again. The Cultural Revolution was a great disaster that makes every Mainland Chinese chilled to the bone. It is especially frightening to me because of my family background."

"For the first eight months of the persecution of Falun Gong, I was monitored around the clock. There was a young man outside my house pretending to be a fruit vendor. When I went out, another man would follow me. My telephone line was tapped. My letters were opened and even stolen. The Public Security Bureau (PSB) and the security officers often summoned me to the bureau for a 'talk.'"

"One day I decided I would no longer accept this harassment. Practicing Falun Gong made me a better person. I had not done anything illegal or anything against my conscience. I did not deserve to be treated like this. I told them in a loud but dignified manner, 'From now on you must not call me or harass me again!'"

"After that day, the police no longer bothered me," Han said. One day while Ms. Han was wiping the floor, she began to reminisce over her childhood, including about her life before and after she began to practice Falun Gong. Something touched her and she shouted toward the sky, "I want to return to my true self!"

"I am a vocalist, so I have a loud and clear voice. I guess all residents in the entire build heard me. My entire body shook after the shouting. Afterwards, I pulled myself together and started over again. The next day I started to tell people important facts about Falun Gong.

"When I first began to distribute Falun Gong's truth-clarification materials, I was quite careful. One day I went to Wangfujin, the most popular place in Beijing. I saw many people distributing promotional flyers. I thought: I distribute materials that contain facts about Falun Gong. It is more meaningful than distributing those promotional flyers. Why can I not do it in an upright manner?

"When I remembered that I am doing the most righteous thing, I no longer felt the jitters. Since then, I have been distributing truth-clarification materials holding my head high. I use all kinds of opportunities to clarify the truth about Falun Gong. When I run into friends and acquaintances, I will tell them that I still practice Falun Gong."

When asked why she insists on clarifying the truth about Falun Gong, Ms. Han explained, "Falun Gong is most righteous. Falun Gong practitioners are very good people. If we ban the existence of righteous things and people, aren't we encouraging immorality?"

Han said, "The evil CCP is the greatest disaster that ever appeared on this planet. It is a disaster to billions of people in China. Also, its extends its claws to the rest of the world. We feel it is our mission to tell the world's people the truth about the CCP's crimes against humanity."

"The CCP is the most wicked organization in the world. It is persecuting practitioners and even harvesting their internal organs for economic profit. Its list of crimes have enraged heaven and earth. It is bound to be annihilated by Heaven. The CCP is becoming weaker daily and approaching its demise. This is the reason why we are telling the Chinese people to withdraw from the CCP and its two affiliated organizations as soon as possible for the sake of their own future. If they continue to follow the evil CCP, they will follow the CCP to its doom. That would be horrible."

Ms. Han Suqiu said, "I truly hope that my fellow artists will not be blinded by the immediate benefits offered by the CCP and that they will wake up and recognize the CCP's lies as soon as possible. It's high time that we return to the true form of art that heaven has intended for us."

Ms. Han added, "In searching for truth and persevering, I shouted loudly twice toward heaven. Now I will shout out again: Wake up quickly! Withdraw from the CCP and its two affiliated organizations quickly! Do not be trapped by the CCP!"

Interview with a Skilled Vocalist: What is the True Meaning of Life? (Part A) (Photos)