Interview with a Skilled Vocalist: What is the True Meaning of Life? (Part A) (Photos)

(Clearwisdom.net) "I was considered a successful musician in China's music circles. With the passage of time it all became like an old shoe and I lost interest in my success. Just the opposite happened. I was disgusted when receiving high honors and untold wealth. I was no longer interested in all that I had gained through a struggle that I called 'Vanity Fair.' I felt devoid spiritually and asked myself frequently--When can I get out of this whirlpool that is human life? Is this considered a normal human life? Where lies the true meaning of life?" 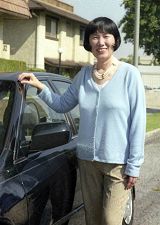 Ms. Han Suqiu now resides in the United States. She graduated from the Chinese Central Conservatory of Music Vocal Training Department and was a principal singer at the conservatory for 12 years. She was a solo singer and lead singer in countless large-scale performances. She also gave recitals. She was appointed as voice professor in the China Central Nationality University Vocal Training Department. In addition, she was invited to teach vocal music at various music institutes in China and abroad. Ms. Han has published many articles on vocal music and has been an adjudicator at many singing competitions.

Ms. Han said, "My songs brought happiness to a great many audience members and I also tried to do my best when teaching students. I was presented with many flower bouquets and won many outbursts of applause, fame, position and money. However, the more impressive my achievements, the more I would feel empty and lonely. Therefore, I began to read some Buddhist and Daoist books. I wanted to find a "pure land" where I could hide. Thus, I contacted known Buddhists and Daoists."

In order to find a "pure land" Ms. Han visited temples all over China. She was searching for a master. She said, "Several 'famous' monks and nuns asked me to become their disciple, so I immersed myself into religion."

Monks and Nuns Live Under the Same Roof and Daoist Priests Eat Live Seafood--Where is the Genuine Buddha Law and Genuine Dao (The Way)?

It did not take Ms. Han long to discover that religion was not a truly pure land. She said, "I stayed at a temple in Wutai Mountain for a few days and discovered that dozens of monks and nuns lived under the same roof. They ate together, chanted scriptures together and conducted Buddhist rituals together. There is a Chinese saying amongst everyday people, 'Observe propriety between the sexes.' Then how could monks and nuns mix together? I could not understand.

"Also, the abbot had a very bad temper and the monks and nuns were afraid of him. One day, during a Buddhist ritual, he pushed everything on the incense burner table to the ground, simply because something was not to his satisfaction. At the same time, he even spit out a torrent of abuse. He always complained that others were not treating him well and not giving him due respect. I went up the mountain filled with hope, but came down the mountain completely disappointed and puzzled. At a banquet, I met a Daoist priest who was very well-known in Daoist circles. He was drinking wine and eating live seafood. I asked him if it was proper for a person in his position to eat such food. He replied, 'Religion should conform to the ways of life of any given time!' I was really shocked and did not know whether to laugh or cry. I entered religion because I was no longer comfortable with everyday life, and here, he wanted the religion to conform to everyday trends. I remained confused despite much thought.

"During the time when I immersed myself into religion, I often heard people say money was needed for renovating a temple or building a Buddhist temple. I used to support such activities with large amounts of money in an attempt to learn the genuine Buddha Law. I wanted to find out where I had gone astray. For a very long period of time, only one monk talked to me about the 'Buddha Law,' while others asked me for money. They did not talk to me about Buddha Law, and said nothing about cultivation.

"As a result, I became more and more depressed and no longer wanted to speak. I often looked up to the sky and heaved deep sighs. One night, when I was pondering but was unable to make inroads into the meaning of life, I shouted at the top of my voice, 'What on earth is the true meaning of life? Who can answer this question?'

"I am a singer so I have a loud voice. What I shouted shook Heaven and Earth."

When I Was in Despair, Falun Dafa Dispelled the Darkness in My Heart

Ms. Han was becoming more and more puzzled about the meaning of life and was in a state of despair. One evening, when Ms. Han passed by a book booth in Beijing, she saw a blue book sparkle. She said the book attracted her attention. It was Zhuan Falun, a Falun Dafa book.

She said, "When I opened the book and saw Teacher Li's photo, I felt a very powerful warm current move through my entire body, beginning at the top of my head. Instantly I was bathed in a warmth that I had never experienced before. At the same time, a voice came from deep within me, 'This is my Master!'"

She said, "If I had not been in public, I would have cried loudly. Back home I did not eat or drink. I finished reading Zhuan Falun in one sitting. The broad and profound Fa principles of Teacher compelled me to admire him from the bottom of my heart. My doubts about religion, that had developed over a long period of time, disappeared and all darkness in my heart was dispelled.

At the time, my gratitude toward Teacher was beyond description. Teacher did not abandon me, who nearly took a wrong path. I took a pledge in front of Teacher's portrait, 'No matter what happens, I will follow the Fa!' Thereafter, I embarked on the cultivation path and never wavered.

Ms. Han Suqiu said, "I always expended great effort in everything I did. I was known as a workaholic. When I was only a little more than 30 years old, my health deteriorated because of pressure from my work. I became an invalid. Every year I would be hospitalized once or twice. This happened mainly when I taught at the Central Nationality University. I collapsed as a result of working too hard. At the time, my whole body, especially my vital organs, was unhealthy. Though I was 1.7 meters tall (5'6"), I only weighed 49 kilos (108 pounds). I looked very pale. Most of the time when an ambulance rushed toward our dormitory, it was for me. Since I had to take so much medicine, I almost became a doctor."

Ms. Han continued, "After learning Falun Gong, I was glowing with health. Those who did not know my past could not believe that I used to be a very sick individual.

"I had a very bad temper before I learned Falun Gong. After learning Falun Gong, people around me sighed with emotion, 'Hey, how come you have such a good temper!' This was because I learned to look within, find my shortcomings and eliminate them. I strove to be kind and compassionate toward others and always thought first of how others would think or feel. Therefore, I gradually changed into a better and healthy person. Now, I no longer lose my temper."

In Cultivating Truthfulness, Compassion and Forbearance I Became a Genuinely Good Person

Ms. Han Suqiu said, "After learning Falun Dafa, I took the principles of Truthfulness, Compassion and Forbearance as my standard for living. I constantly eliminated my incorrect thoughts and actions. I learned to be and changed into a genuinely good person."

She cited an example. "In April 1997, my husband and I went to a practitioner's home by bike. I was hit by a car and thrown about seven or eight meters. At the time, I was a bit muddleheaded. However, I thought of what Teacher said:

"A practitioner crossed the street on her bike. At a turn of the street, a luxury car came and knocked down this practitioner, a woman over fifty years old. It collided with her at once and hit her very hard. With the sound of "bang," it hit her head, and her head hit the car roof squarely. At that point, this practitioner's feet were still on the bike pedals. Though her head was hit, she did not feel any pain. Not only did she not feel any pain, but her head did not bleed, either; neither did it swell. The driver was scared to death and jumped out of the car. He hastily asked her if she was injured and suggested that they go to the hospital. She replied that she was all right. Of course, this practitioner had a very high xinxing level and would not get the driver into trouble. She said that everything was fine, but the collision left a big dent on the car. ("Lecture Three" in Zhuan Falun)

I thought of Teacher's words:

"The thought at that moment can bring about different consequences." ..."This practitioner slowly got up from the ground and said: 'There's nothing wrong. You can leave.' She brushed off the dirt on her clothes and left with her husband." ("Lecture Four" in Zhuan Falun)

Ms. Han Suqiu said that all practitioners know Falun Dafa is really good. "At the time, we practiced the exercises together, shared experiences, and looked within to find our shortcomings and let go of these bad things. Our moral standard was upgraded and we became better people. If everyone can act like this, won't our society improve and improve?

“Improving by Joining Group Fa Study and Memorizing the Fa”