(Clearwisdom.net) The Minghui School Summer Camp in Northern California started on July 23 and ended on August 17 in Fremont. 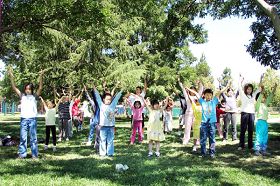 The students at the summer camp were all young Falun Dafa practitioners from 5 to 18 years old. The camp offered them a good cultivation environment and a chance to learn traditional Chinese culture.

Many of the children could not read Chinese in the beginning, but after reading Zhuan Falun with the teachers two or more times, most could read it by themselves and were also able to read other Chinese books.

One eleven-year old boy was very naughty when he first came to the summer camp. He had conflicts with other kids and could not calm down to study the Fa or do the exercises. The Minghui School teachers kept studying the Fa with him and communicating with him on the Fa. Now he has learned how to look inward. He reads the book calmly and sometimes helps the teachers take care of younger children.

At the end of the summer camp, the students could not only read Zhuan Falun by themselves, but they also learned how to care for and help each other.

“Who Murdered Ms. He Yingqing from Hunan Province?”