(Clearwisdom.net) On the afternoon of August 19, 2007, a grand parade to support the 25 million people who have quit the Chinese Communist Party (CCP) took place in Korea's largest Chinatown in Incheon City. Hundreds of people from seven groups, including the Falun Dafa Association in Korea, the Coalition to Investigate the Persecution of Falun Gong (CIPFG), the Anti-corruption Investigation Union, the Korea Judicial Reform and Pan People's Association, the Democratic People's Alliance, the Korean Saving the Poor Organization, and the Citizens' Union to Counteract National Crisis participated in the activity. 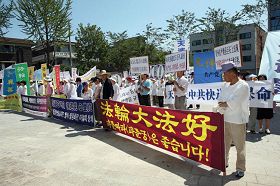 Participants strongly condemned the CCP's violence and called on the Chinese people to separate the country of China from the CCP, and make a wise choice to leave the evil Party. 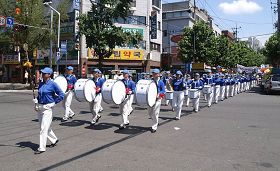 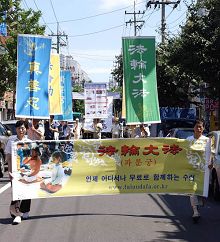 Banner reading "Falun Dafa is Good" in the parade 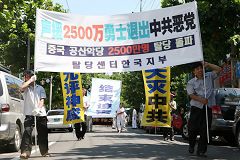 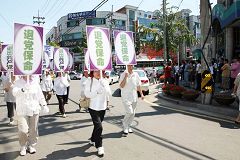 Part of the parade procession 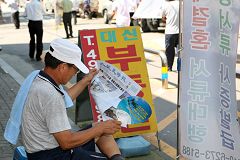 After receiving a flyer, a bystander immediately reads the information on quitting the CCP


Korea Human Right Group: "We Are Not Against China; We Are Against the CCP's Brutality"

A representative from the Anti-corruption Investigation Union stated, "Not long ago I heard of a piece of sad news from a country with five thousand years of civilization - China. The CCP removes organs from living Falun Gong practitioners and sells them for profit! It made me very angry!" The representative said that protecting human rights is a universal value. How can a regime that sells human organs and brutally persecutes human rights hold the Olympics? Its actions can't be tolerated!" The representative also strongly condemned the CCP for suppressing Falun Gong and said, "We are not against China, we just object to the CCP's brutality."

Awakened Chinese Quit the CCP and Help Others to Quit

Xue Jingzhu, a volunteer at the Quitting the CCP Service Center in Korea, said there are tens of thousands of Chinese living in Incheon City and there are four Service Centers here. Every week about a hundred people quit the CCP at these centers. With a parade like this, there will be over one hundred people quitting the CCP in a day. Some people who quit the CCP go home and bring back their relatives to quit as well.

According to Xue, some Chinese people have volunteered to help at the service center. An older man in his nineties from Yanbian City, Jilin Province, used to be in the Red Army during the Cultural Revolution. He regretted his past actions. He quit the CCP as soon as he got to Korea. He now comes to the service center every day to persuade the Chinese people to quit the CCP. Xue said people fresh from China still have wrong impressions about and against Falun Gong because of the CCP's slanderous propaganda in China. But after a while, many of them come to the service center to acquire Falun Gong materials, wanting to understand the facts.

The CCP's Brutality Shocks the Koreans

The displays in the parade showed the intensity of the CCP's persecution of Falun Gong and shocked the Korean people who didn't know about the CCP's tactics. A man in his thirties, after learning that the CCP removes organs from living Falun Gong practitioners, said, "My heart shivers upon hearing this news."

“Conquering Sleepiness and Using the Limited Time to Save Sentient Beings”