(Clearwisdom.net) On the fifth day of the Falun Dafa Nine-day Learning and Practicing Session held in Chiyi, Taiwan, Principal Wu Yan-men of Kouhu High School in Yunlin County shared his cultivation experiences with everyone. Principal Wu asked everyone to close their eyes and hold both hands in front of their chests. Then he read Lunyu by Master Li. Afterwards, he asked everyone, "How do you feel? Do you know why I read Lunyu?" He told a touching, real life story. 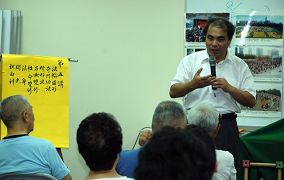 Principal Wu is good at advising students. Last year three mischievous students were smoking, drinking, cursing teachers, and bullying classmates. Teachers could not handle them so the students were taken to the principal's office. Principal Wu said, "I asked the three students to sit on sofa. Then I said 'Can I read a few paragraphs to you?' as I held the book Zhuan Falun. They agreed after looking at each other. I started to read. After three minutes, some of them had headaches or their chests hurt. The student who had cursed a teacher had difficulty swallowing. I told them not to worry, that it was the beginning of physical change. Then I explained the principle about the relationship of virtue and karma. They listened and seemed to understand."

"After reading once, I asked, 'Can I read it once more?' They agreed."

"After I read the second time, all three students collapsed on the sofa. One student who had been in a car accident and had had surgery on one knee felt warmth in that leg, but his other leg felt normal. He also felt like he was going to vomit."

"I read Lunyu for a third time. Not long after, all of them stood up and ran to the restroom. After vomiting or using the the toilet, they all felt better. One of them, who had sprayed water on a teacher, still had a headache. I asked him to apologize to the teacher right away. After an hour, he ran back and told me, 'I apologized to the teacher. I feel totally well.'"

"Three days later, they brought the three students back to me and asked me to read Lunyu to them again. The students told me, 'Principal, we don't drink, smoke cigarettes, or curse teachers any more. We also no longer have headaches.'"

Principal Wu explained to the villagers, "There are many marvelous things in Dafa. My story is to tell you that compassionate Falun Dafa, with its boundless mighty virtue, enabled these students to think about becoming good people. In the future, you will experience the grace of Falun Dafa after you practice it."