From August 8 to 11, the annual 4-day-long Washington County Fair was held in St. George, Utah. Falun Gong practitioners participated in the event and met many people with an interest in Falun Dafa. 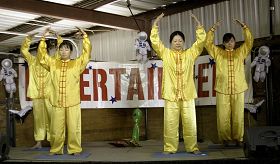 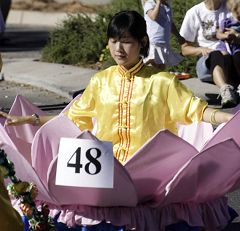 Meditation inside the lotus flower

Over the four days of the fair, one of the exhibitors often came to talk to Falun Gong practitioners. When he learned that the practitioners all volunteered to clarify the truth, he wondered about the reason for their handing out materials for free and not asking for donations.

A practitioner told him that they came here with several purposes. One was to promote the exercise because it is so good and they wanted more people to know about Falun Gong and benefit from it. Second, they wanted to expose the inhuman persecution in China and ask all people of conscience to work together to help end it. The practitioner explained that although they don't make any material gain, they receive spiritual support from many people.

The exhibitor nodded and smiled. He is an avid photographer. In the four days of the fair, as his understanding of Falun Dafa and practitioners was getting deeper, he took many photos of the practitioners' activities. On the last day, he brought over a lot of photos he had taken and gave them to the practitioners. He very much enjoyed the times spent with the practitioners and said he would continue to pay attention to Falun Gong issues.

There were many other people with an interest in Falun Gong at the fair. After they learned the facts, they in turn clarified the truth to visitors, friends and relatives, to expose the persecution in China and help collect signatures on a petition to end the persecution.

Amy was another exhibitor at the fair. On the first day, she received a truth-clarification CD from a practitioner. That night, she watched the CD with her husband and learned the truth behind the persecution of Falun Gong in China. She told the practitioners that she felt she had to do something to help end the persecution, so she talked with her husband that night and decided to write a letter to their government officials and to let more people know about it. On the second day, she brought all her family members and friends to the Falun Gong booth to sign the anti-persecution petition. She also began to clarify the truth to visitors to her booth, and invited people to sign the petition.

Another exhibitor selling health drinks, also clarified the truth to visitors to her booth and collected signatures on the petition. At noon, she came by with a big smile. She gave the practitioners a form filled with signatures and said, "I'll be back!" In one day, she came over four times with a total of 40 signatures. In the evening of the fourth day, she asked for a form and made many copies. She said she would collect more signatures and mail them to the practitioners.

Another exhibitor was a landscape photographer. On the second day, he saw the practitioners in yellow exercise suits doing an exercise demonstration and was very interested in their outfits. He took some photos of the practitioners and picked up some truth-clarification materials and an English copy of the Nine Commentaries on the Communist Party. He read the paper earnestly. After read the materials, he said he wanted to learn the exercises. Though he was interrupted by customer a few times, he learned the five sets of exercise on the site. In the end, a practitioner gave him a copy of Zhuan Falun in English, which he happily accepted.

A young man learned about the persecution of Falun Gong in China and wanted to write a story for a magazine. On the second day, he came again with a copy of his story. He also learned the five sets of exercise on the spot.

A mother with seven children looked at the truth-clarification photographs and said with tears in her eyes, "How can they do this? Who makes their hearts have so much hatred?"

“A Taoist Talks About Destiny”