On August 4-5, 2007, Falun Gong practitioners from Sweden did the exercises together, sent forth righteous thoughts and "clarified the truth" near the famous Shipwreck Museum in Stockholm. During these activities, practitioners demonstrated the five Falun Gong exercises to visitors. At the same time, they also told people about the tide of quitting the Chinese Communist Party (CCP) resulting from the circulation of the Nine Commentaries on the Communist Party, and exposed the Party's cruel persecution of Falun Gong for over eight years, including the atrocity of removing organs from living Falun Gong practitioners, which has continued for over eight years.

The weather was exceptionally good. A great number of tourists from all over the world were waiting in a long line at the entrance of the museum. The beautiful Falun Gong music carried far, making the crowds of people in the line shift their eyes in the direction of the practitioners. People came forward to film or take pictures in front of the banners, "Falun Dafa is Good" and "Truthfulness, Compassion, Tolerance." Some asked, "What is Falun Gong?" "Why is Falun Gong being persecuted?" On learning the truth, many people said, "How can it be like this! It is too cruel! We cannot allow such a thing to happen." 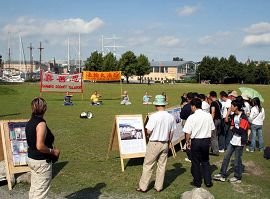 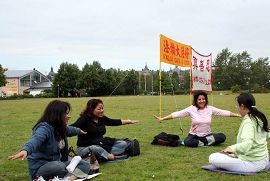 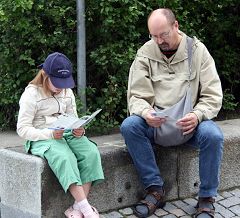 Both Father and daughter are carefully reading fliers

Amazed, two young men from South Korea asked, "Where does the music come from? It is so beautiful!" Practitioners told them the website where they could download the music for the exercises free of charge and introduced the Dafa books to them in detail. They were very delighted and said that they would read them when they got home.

Falun Gong practitioners distributed truth-clarifying materials that they had prepared in over ten languages to tourists from all over the world. Many people were very interested in Falun Gong. A lady from Saudi Arabia wanted to learn the practice on the spot. Two of her friends came looking for her. On seeing her learning Falun Gong, the two also wanted to learn, so the three friends learned the fifth exercise together.

On seeing some people practicing Falun Gong, a Swedish tour guide was very pleased. She said that she and her daughter wanted to learn the practice. She then took down the address of the local practice site and told her guests loudly, "We'd better hurry up with our visit and then we will come here to watch Falun Gong."

During the activities, Falun Gong practitioners noticed that the situation has changed over the past eight years, especially with regard to tourists from China. Previously, many of them would keep themselves far away from the Falun Gong booth and dared not come forward. Now, they come over to the booth to watch and take photos, talking with practitioners, and wanting to get truth-clarifying materials. A middle-aged lady told practitioners in detail about how her husband, who was an officer, was persecuted by the CCP and what their life was like under the rule of the CCP. She said that she would bring what she had seen to her family members in China and she believed that good will be rewarded with good, and evil with evil.

Two men from southern China asked practitioners to take photos for them and said that they would take pictures of the Falun Gong exercises to take home to show their families and friends. They said, "What you hear may be false, but what you see is true." Finally they said, "You are our hope!" They left happily after they accepted the Nine Commentaries and software for breaking through the Internet blockade.

However, some Chinese tourists refused to accept materials and were rude and unreasonable. Practitioners patiently talked with them to dispel their misunderstandings. Many of them remained quiet and lowered their heads expressing their agreement. Seeing these Chinese poisoned by the CCP's culture, Falun Gong practitioners felt their responsibilities were even greater. They said that they would persist in clarifying the truth vigorously, deeply and painstakingly, and they hoped that more and more people would awaken as soon as possible.

“Edinburgh, Scotland: Practitioners Participate in the Edinburgh Cavalcade Parade for the Sixth Year in a Row (Photos)”