Bayreuth, Germany: "An Olympic Games Without the Communist Party Should Be Held" (Photo)

On July 25, the annual 30-day Bayreuth Festival, featuring the operas of Richard Wagner, began in Bayreuth, Germany. The 2007 Bayreuth Festival attracted celebrities, dignitaries, the media, artists and film stars from Berlin, Munich and all over the world. 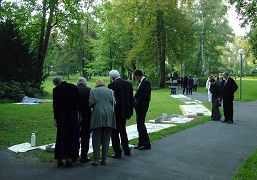 At the same time, initiated by the Coalition to Investigate the Persecution of Falun Gong (CIPFG) and supported by many human rights organizations, the Human Rights Torch Relay lighting ceremony was held in Athens, Greece on August 9. Falun Gong practitioners in Bayreuth held a truth-clarification display with information about the Human Rights Torch Relay, as well as materials to help people learn about the tide of quitting the Chinese Communist Party (CCP), and distributed the Nine Commentaries on the Communist Party. They also handed out information exposing the eight-year persecution of Falun Gong and the CCP's atrocity of removing organs from living practitioners for profit in the organ transplant industry.

By the third day of the opera festival, during which seven operas were performed, many audience members told the practitioners who were distributing leaflets: "I have already got a leaflet." "I've learned the news and already signed the petition." "I will carefully read your leaflet when I get home." "I signed the petition after reading your posters." "You've done a very good job." "There should definitely be someone doing this." "I am an artist. I went to Beijing three years ago. The human rights situation there simply cannot be tolerated. I will sign the petition." and "All four of my family members have signed the petition." An elderly opera fan with a noble demeanour added, "An Olympic Games without the Communist Party should be held."

During the Bayreuth Festival, ninety percent of the people who signed the petition told the practitioners that they had been to China. Many of them knew about some of the worst cases of human rights there and were not surprised at the CCP's organ harvesting from living Falun Gong practitioners. However, though it has been over a year since this most heinous of crimes was disclosed, CCP hospitals, especially military hospitals, are continuing to do such operations. Many people who attended the Wagner Opera Festival could not imagine such an atrocity.

The distribution of leaflets about the Human Rights Torch Relay and boycotting the CCP's blood-stained Olympic Games and the collection of signatures continued into the twelfth day of the opera festival in Bayreuth. Many politicians and VIPs and their spouses accepted leaflets from the practitioners, including German Chancellor Merkel, the incoming governor of Bavaria, the Minister of Ministry of Interior, the EU President, the former German Foreign Minister, the Minister of the Economic Department, the Mayor of Nuremberg, the former Mayor of Bayreuth, leaders of all political parties, as well as many movie stars and singers. Some asked for two copies, saying that the extra one was for their friends.

Other activities such as speeches, rallies and a photo exhibition were also held in the city center of Bayreuth during the Bayreuth Festival. It is expected that the Human Rights Torch Relay will continue for about one year and will include over 100 cities in dozens of countries on five continents. By means of the Human Rights Torch Relay, the CIPFG hopes to call on the international community to pay attention to the CCP's violation of the spirit of the Olympic Games, the infringement of human rights and the persecution of groups and individuals in China. They hope to stop the CCP's atrocity of harvesting organs from living Falun Gong practitioners and prevent the 2008 Olympic Games in Beijing from deceiving the world and concealing the tragic crimes taking place in China.