Japan: Practitioners Praised for Their Performances at the Tochigi-ken Oyama-shi Fireworks Festival (Photo)

(Clearwisdom.net) On July 28, 2007, Falun Gong practitioners in Japan participated in the 56th Fireworks Festival in Tochigi-ken Oyama-shi, where they performed graceful dances and songs. They also demonstrated the five Falun Gong exercises. 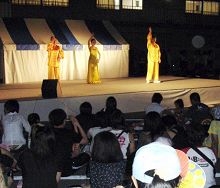 It was the first time practitioners participated in a large-scale festival in this city. In the evening, the practitioners performed the "Fan dance", the traditional "Flower fairy" and "Golden Buddha with A Thousand Hands" dances, and sang "Welcoming Spring", "Awaking Dream", and "Coming for You". When the practitioners demonstrated the Falun Gong exercises, the host explained the facts of the persecution in China in Japanese and then again in Chinese.

The performance won praise and applause. The chairman of the organizing committee said, "I regret that I was not able to see your performance due to my busy schedule, but I heard people praise your performance. Please come again next year."

After the performance, the practitioners distributed lots of truth-clarification materials. Many Chinese people who watched the show accepted the truth-clarification literature, and announced on the spot their desire to quit the Chinese Communist Party and its affiliated organizations.