On the afternoon of July 1, 2007, a rally to support the twenty-three million Chinese people quitting the Chinese Communist Party (CCP) and its affiliated organizations was held in front of Birmingham City Hall. TV station CBS 42 covered the event and broadcast the story during the evening news. 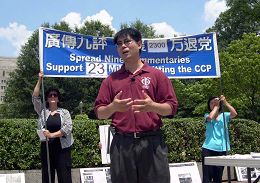 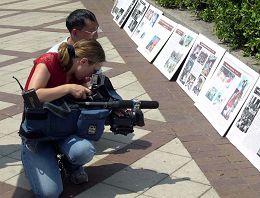 A reporter from TV station CBS 42 covered the event. A Falun Gong practitioner handed a copy of Falun Gong Today and a flyer exposing the CCP's live organ removal atrocity to the reporter and clarified the facts of the persecution.

The CBS evening news covered the event that same day and showed the rally, including a banner worded "Spread the Nine Commentaries [1], Support 23 Million People Quitting the CCP," and posters exposing the CCP's brutal killing and torture of the Chinese people. The news report stated that it was the tenth anniversary of the sovereignty transfer of Hong Kong to China, and many protest activities occurred across the world that day. The report said that in Birmingham, a group of people gathered in the park, whose purpose was to have more people know of the CCP's evil nature and cruel torture of the Chinese people.

The CBS report referred to Dr. Yang from Alabama Agricultural and Mechanical University who explained that 23 million Chinese people had quit the CCP because they recognized the CCP's lies and its evil nature. The report stated at the end that the purpose of the protest was to stop the CCP's killing of innocent people and harvesting organs from living people for profit.

[1] The Nine Commentaries on the Communist Party

“My Understandings About Rescuing Imprisoned Practitioners”