Falun Gong practitioners hosted a press conference on July 3, 2007, to protest the action taken by Anpang Jaya City Council to have a "Falun Dafa is Good" billboard taken down. The billboard stood alongside the No. 2 Ring Road in Kuala Lumpur and was taken down by the billboard company before the contract expired. 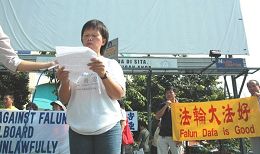 Falun Gong practitioner Ms. Chen calls on the Malaysian government to be aware of how the Chinese Communist Party wields its control in Malaysia

The press conference was held underneath the billboard, where the sign reading "Falun Dafa is Good" had been taken down. Over 30 Falun Gong practitioners rallied in the busy location beside the highway holding banners printed with, "Condemn Chinese Communist Party Extending the Persecution into Malaysia," "Condemn Discrimination Against Falun Gong, Advertisement Board Taken Down Unlawfully." Many cars slowed down to look at the banners and the press conference underway.

Billboard Contract Had Been Extended to March 2008, But City Council Ignored It and Orders Sign Removed

Falun Gong practitioners had extended the contract for the sign until March 2008, but on June 19, 2007, Anpang Jaya City Council sent a letter to the billboard company requiring them to take the sign down by June 27.

Practitioners immediately contacted city officials. One high level city administrator told the practitioners to contact Eric Ong, the president of Ma Hua Dan Ban district, but refused to release Ong's telephone number. A City Council member also suggested contacting Eric Ong. The practitioners went to Ong's office, but he refused to meet with them, giving no explanation. Based on the above, it seems clear that Ong had some role in this matter.

The "Falun Dafa is good" billboard was first put up at this busy highway location alongside the No. 2 Ring Road in 2004. There has been much interference since then. At the end of 2005, the board was covered in paint, and the sign had to be replaced. In June 2006, several local Chinese newspapers reported that Eric Ong hosted a press conference complaining about the billboard. Ong said his organization would complain to the City Council, the City Engineering Department and the Department of the Interior to have the billboard taken down. Ong wrote a defamatory letter to City Council repeating Chinese Communist Party (CCP) propaganda to turn public opinion against Falun Gong. Dafa practitioners clarified the truth to city officials, and the billboard continued to stand.

The billboard was erected with all necessary permits in place. The board had been standing for three years.

In the press conference the practitioners stated the following:

Suspicious Man at the Press Conference

Reporters, police and some City Council members from Anpang Jaya attended the press conference. There was also a suspicious Chinese man present who photographed many of the practitioners. When asked which media he was from, he said he was just curious, and then disappeared quickly. Practitioners can only surmise that he was a spy sent by the Chinese Communist Party.

“London Press Conference: Statement Regarding Human Rights Torch Relay by Chair of Coalition to Investigate the Persecution of Falun Gong in China”