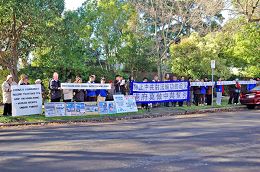 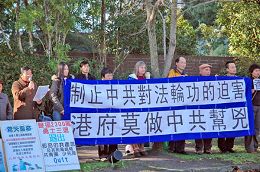 The spokesperson for the Falun Dafa Association in Victoria read aloud a statement in both Chinese and English. The statement said that on the tenth anniversary of Hong Kong returning to China, the Hong Kong government strictly denied entries of overseas Falun Gong practitioners who went to join the parade based on a blacklist provided by the CCP. As of July 1, 2007, close to one thousand Taiwanese Falun Gong practitioners had been deported, forbidden to board their flights or denied visas. Those deported included practitioners from Taiwan, Australia, the Philippines and Macao. This is a human rights case involving the largest and the most violent deportation since Hong Kong was returned to China.

Practitioners pointed out at the press conference that the manipulator of the deportation was Zheng Qinghong, who has attempted to turn Falun Gong against Hu Jintao and to force Hu to stand on the side of the perpetrators.

Falun Gong practitioners called for people of conscience under the CCP's power to see clearly the evil nature of the CCP, join the strong tide of quitting the CCP and choose a bright future for themselves.

Visa applicants at the Chinese Consulate were attracted by the banners and speech, and many people read the brochures distributed by Falun Gong practitioners after they left the Consulate.