Montreal, Canada: Rally and Parade on July 1, Designated as "Disintegration of the CCP Day" (Photos)

The Global Service Center for Quitting the Chinese Communist Party (CCP) designated July 1, 2007, as Disintegration of the CCP Day. At 3:00 p.m. that day, Falun Gong practitioners from three places in Eastern Canada, including Montreal, Ottawa and Toronto, along with the Canadian Divine Land Marching Band and local people, held a rally in Zhongshan Park in Montreal's Chinatown, and then marched around Chinatown to support the 23 million brave people who have quit the CCP, and to call on more Chinese people to quit the CCP for their own safety. 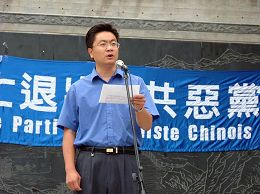 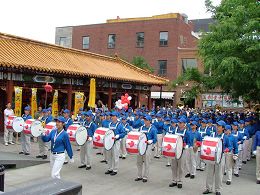 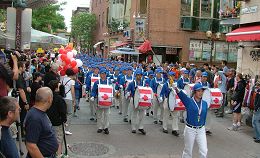 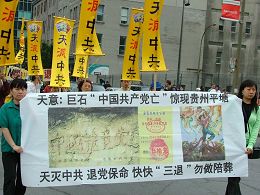 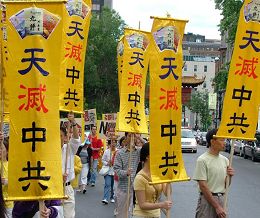 Liu Jinan, a person in charge of the Canadian Service Center for Quitting the CCP from Toronto said, "July 1 is a special day for Canadian Chinese. July 1 is the 140th Canada Day. We have resided and lived a peaceful and safe life in this country. We also know that on July 1 eighty-six years ago, the evil CCP was formed. That day was the beginning of the CCP bringing endless catastrophes to the Chinese nation and people. On this day, the CCP evil specter intruded into the body of the Chinese nation, formed a malicious tumor and spread everywhere, until 1949 when it covered the whole body of China. As a result, for the following decades, the people have been plunged into an abyss of misery. Culture has withered and 80 million innocent people have died unnaturally. Therefore, the Global Service Center for Quitting the CCP proclaimed July 1, 2007, as Global Disintegration of the CCP Day."

Mr. Wei, a volunteer worker from the Montreal Service Center for Quitting the CCP, made a speech at the rally. He enumerated a series of disasters that the CCP has brought to the Chinese nation, and praised the 23 million brave people who have quit the CCP, and who have formed the genuine backbone of China, and truly demonstrate patriotism. He called on more people to join in quitting the CCP.

Mr. Li Zhenwen verified at the rally that some Chinese groups are manipulated by the CCP, a fact that former CCP diplomat Chen Yonglin exposed. He said that after Chen Yonglin left, these groups attempted to negate what Chen Yonglin had exposed. Two years ago, some people representing these groups wrote to the Canadian Radio-television and Telecommunications Commission to oppose the independent NTDTV in Canada. 1.3 billion Chinese people are unable to watch a TV broadcast that is not controlled by the CCP in China, so why oppose such an outspoken TV station overseas? It is ridiculous. Mr. Li concluded by asserting that all Chinese people are the descendants of the Chinese nation, not offspring of Marx and Lenin.

During the rally, many people took the initiative to learn the facts about Falun Gong. Two audience members quit the CCP and its affiliated organizations on the spot. An older Chinese person held a banner bearing a message about quitting the CCP on his own initiative, and took part in the entire parade. He said that he had learned about Falun Gong and now understood that the Communist Party is very bad.

“CCP Weakness Demonstrated by its Fear of the Old, the Weak and the Young”

“Mrs. Gao Caifeng from Dalian City, Liaoning Province Passed Away While Her Children Were Repeatedly Persecuted”