On the afternoon of July 3, 2007, Falun Gong practitioners in Brisbane rallied in front of the Chinese Consulate to protest Hong Kong authorities' large-scale unlawful deportation of practitioners based on a blacklist handed out by the Chinese Communist Party (CCP) before the tenth anniversary of Hong Kong's handover. 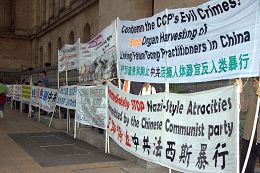 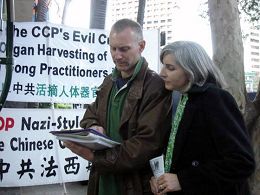 A couple signed their names to support Falun Gong

It was peak traffic time after work and many people stopped to look at the banners and pictures about the Chinese Communist Party's evil deeds.

Many people received a flyer and then asked for more details about the incident. After learning the truth, many people stood in line waiting to sign their names to support the petition to end the persecution.

A couple signed their names and said, "We saw a similar protest last year. Obviously, the situation in China is not improving. It is good to see someone step up against the persecution. I hope that Amnesty International and other organizations will learn about this and do something to end the persecution."

A senior citizen signed his name and said he had a friend in China who was persecuted by the CCP for practicing Falun Gong. Before he left, he greeted Falun Gong practitioners with his best wishes.

During the rally a loudspeaker broadcast the CCP's atrocities and invited people to quit the CCP and its affiliated organizations.