(Clearwisdom.net) The Inaugural New Tang Dynasty TV's (NTDTV) "International Chinese Classical Dance Competition" enters its countdown. The competition is scheduled to be staged at the Skirball Performing Arts Center at New York University. Contestants from around the world have arrived. NTDTV held a press conference about the competition on July 2. The host said that it will be a rich feast of Chinese classical dance of highest caliber.

The competition's telephone hotline has received many phone calls from around the world, including mainland China, to inquire about the competition. Some registered to participate in the competition, some purchased tickets to watch. Some were concerned about the interference from the Chinese Communist Party (CCP).

NTDTV said that CCP oppression has failed to achieve its goal. CCP oppression can only enhance NTDTV's recognition, and help NTDTV to become even more popular. Past instances of CCP interference have all turned into a good promotion for NTDTV. This time is no exception.

Contestants Arrive in US, Talents Gather Together, A Grand Occasion in History of Dance Community

Host of the news conference Tim Sun said that preparations for the International Chinese Classical Dance Competition are in full swing. About a hundred contestants from mainland China, Hong Kong, Taiwan, Japan, other Asian countries, as well as many countries in Europe, the US and Australia, have arrived in New York.

Contestants include dance teachers and dancers from professional arts academies and dance schools.

The Dance Competition Will Promote Chinese Classical Dance to the World

Renowned dancer Cui Rongrong from Martha Graham Dance School and Alvin Ailey Dance School in New York explained that Chinese classical dance emphasizes spirit. The spirit is composed of body techniques and rhythm, representing outer techniques and inner grace. The harmonious incorporation of the two aspects manifests the demeanor and essence of the Chinese dance. The "figure, expression, strength and rhyme" embodied in the Chinese dance originated from China's 5,000 years of culture. Not only are the movements graceful and beautiful, but they also have profound inner meaning 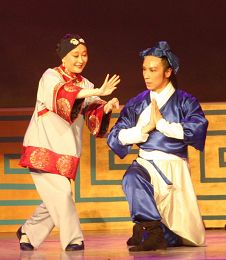 In 2005 NTDTV Chinese New Year Gala, Cui Rongrong acted as an elderly woman in Grinding an Iron Rod into a Needle.

Gu Che-cheng and his wife, were once top dancers in the Taipei Folk Dance Group at Wu Gou Dance Theatre. They are now Chinese dance teachers at Tainan University of Science and Technology. Together with Ms. Liang Yanfang, President of Ren Wu Dance Theatre, the three are veteran dancers each with over 20 years experience. They complimented that the Inaugural International Chinese Classical Dance Competition as a pioneering work, and are happy to see the Chinese dance thrust onto the world stage.

Gu Che-cheng was chosen as the most dazzling dancer and choreographer in the 90s by the Taiwan Dance Magazine in 1995. He talked about the inner meaning of the Chinese classical dance. He said that dance contains the characteristics of folk culture. In traditional Chinese culture, both men's muscular strength and women's gentleness can be embodied by dance movements. Dance has a good effect on rectifying one's heart and correcting one's behavior.

Ms. Li Tsai-E, a national treasure and also a first generation outstanding dancer from Taiwan, expressed her respect for NTDTV's effort to promote traditional Chinese culture. Li admires NTDTV's courage and believes this competition will be of the highest caliber. 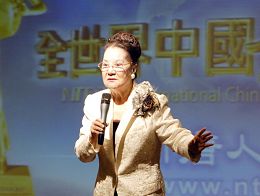 Ms. Li Tsai-E, a first generation outstanding dancer from Taiwan encourages the attendees to grasp the rare opportunity of this competition

The 83-year-old Li said she had been challenging numerous dance competitions in the last half century and never heard of a competition that required certain dance routines, which shows the authenticity of the competition.

After seeing the performance of the of the Divine Performing Arts group in April, You Yue, head of the Han-Hsin Dance Group and winner of the 29th culture exchange contribution award, highly recommended the competition.

Canadian famous Del Art Foundation Education Group founder and board chairman, veteran art educator Marilyn Field has an earnest expectation for the Chinese Dance Competition. She believes the Chinese Classical Dance Competition has the same influence as the Olympics. She said that the Chinese dance is so unique, so amazing, that will be a huge encouragement for everybody.

Renowned democracy movement advocator Gu Si-rao was once a dance teacher. He believed that the Competition will carry forward traditional Chinese culture and at the same time upgrade people's moral quality. He said that getting in touch with dances that are good for one's physical and mental wellbeing and refined traditional Chinese culture can inspire one's conscience. 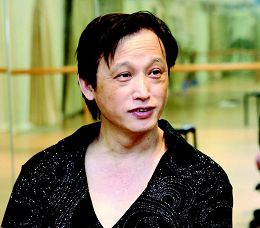 Li Guoqiang, dedicated to dance industry for over 30 years, has high hopes for the Competition

Chairman of Hong Kong Zhan Yi Dance Association Li Guoqiang has been dedicated to the dance industry for over 30 years. He said that Chinese dance is an art with a long history. As Chinese people, we should also promote the flourishing of traditional Chinese culture. He said, "All Hong Kong people and the world's people should support it. We look forward to having such a large scale dance competition."

Regarding the CCP mouthpieces inside China and abroad and special agents slandering and interfering with the dance competition, Wan Yu-min said that the CCP's efforts to suppress the dance competition will be in vain because people by nature love beautiful things. "Things of good nature are welcomed and accepted wherever they travel."

Interference Can Only Make the Dance Competition Much More Popular

Zhu Ruixiang, head of the Dongfang Performing Arts, is glad to see that a competition is about to take place for traditional Chinese dance. Zhu wasn't surprised that the Chinese Communist Party uses its mouthpieces and special agents to slander and interfere with the competition because the CCP often looks at things from its political point of view.

Ma Hui-Min, head of the Taiwan Datang Folk Dance Group, said the competition can promote Chinese traditional dance culture to the world and should be a great thing. Ma couldn't understand why the CCP suppresses it. Wan said that the CCP's efforts to suppress the dance competition will be in vain because people by nature love beautiful things. "Things of good nature are welcomed and accepted wherever they travel," said Wan.

It is reported that during the past several months preparation for the dance competition, NTDTV has been subjected to all kinds of interference from the CCP. Three and a half months ago, the CCP sent letters to all dance groups and schools across China ordering that nobody can participate in the NTDTV dance competition. Many contestants who registered were threatened and had to cancel their plans.

Vice-president of NTDTV Zhou Shiyu said that the CCP is so afraid of a normal cultural art activity. One of the reasons is that it fears that NTDTV carries forward authentic art, and the CCP's "Party culture" faces a complete collapse. The second reason is that NTDTV as a free media, is independent and outspoken.

But he said that the CCP has never succeeded in its suppression, its suppression can only increase the reputation of NTDTV, and make NTDTV even more popular.

The International Chinese Classical Dance Competition is scheduled to be staged on July 6-8, 2007 at the Skirball Performing Art Center of the New York University. On the evening of July 8, after award ceremony, the Divine Performing Arts will present a performance.

The organizers of the Competition said that tickets are available for the semi-finals, finals and award ceremony and the performance of the Divine Performing Arts.