On July 1, 2007, the Global Service Center for Quitting the CCP, Korea Branch, The Epoch Times, Korea Branch, and Korea Falun Dafa Association held a rally and parade in Seoul Chinatown, strongly condemned the Hong Kong government bowing to pressure from the Chinese Communist Party (CCP) and unlawfully and violently deporting Falun Gong practitioners on the tenth anniversary of the handover of Hong Kong sovereignty to Chinese rule. They also supported the Global Quitting the CCP Month, and helped people withdraw from the CCP and its affiliated organizations. Volunteer of the local service center for quitting the CCP Ms. Gao said that people are no longer afraid of the CCP, and many people quit the CCP and its affiliated organizations with their real names.

On July 1, people from all walks of life in Korea gather in Seoul's Chinatown, strongly condemning the Hong Kong government's violent deportation of Falun Gong practitioners 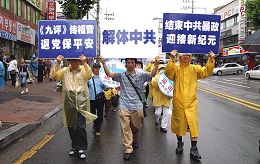 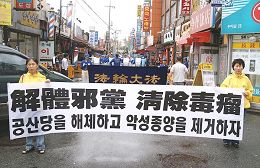 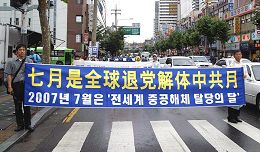 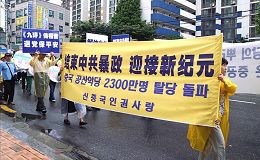 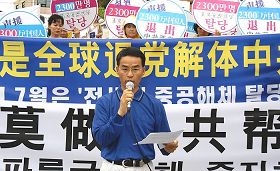 Wu Shilie advised relevant personnel in the Hong Kong government in his statement that under the grand trend of quitting the CCP, the CCP despotic rule is precarious. It has completely lost its senses, and the Hong Kong government should not be its scapegoat. At such a critical historic moment, standing on the side of justice is the only correct choice. 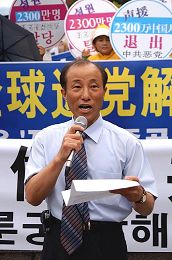 Standing director of the Pan-Korea Judicial Reform and National Union, deputy director of the Coalition to Investigate the Persecution of Falun Gong (CIPFG), Asia Pacific Branch Zheng Qiuchen said at the rally that when Hong Kong handed over its sovereignty to China in 1997, the CCP once promised solemnly "one country, two systems," and Hong Kong's political system would remain unchanged for fifty years. However, only one fifth of the time has elapsed, and Hong Kong has been turned into a "one country, one system," completely become an accomplice of the CCP blatantly trampling human rights and depriving people of freedom. The CCP rogue government is not at all qualified to hold the Olympics, a symbol of peace. He called for a boycott to Beijing's Olympics.

On June 14, Mr. Zheng participated in planning "Global Human Rights Torch Relay Activity" as deputy director of the CIPFG Asia Branch, protesting the CCP's atrocity of harvesting organs from living Falun Gong practitioners that violates the Olympic peaceful spirit, and stopping the CCP from its persecution of human rights. 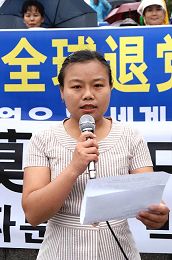 After the rally, in the rain, participants marched in Chinatown. The Falun Gong Divine Land Marching Band led the way. When the parade procession passed a busy section, many passersby were attracted to watch. Some people shouted slogans in support.

Ms. Gao from the Service Center for Quitting the CCP told the reporter that there are many Chinese Korean people living in this Chinatown. In the past, once mentioning quitting the CCP, many people would verbally abuse and even beat them, and would not stop until the Korean police arrived. Now, things have greatly changed here. More and more people quit the CCP and its affiliated organizations with their real names, and people dare to voice their dissatisfaction with the CCP.