On Saturday, July 21, 2007, practitioners in Stuttgart Germany held a "Falun Gong Information Day" on the streets to give people an understanding of the eight-year persecution of Falun Gong in China. They also helped people learn about the organ harvesting atrocities and the tide of withdrawals from the CCP. 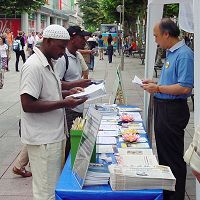 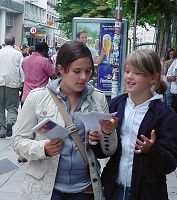 Saturday was very cool, an exception during this week of hot weather. Many people came out to enjoy the pleasant weather. Many local people watched the exercise demonstration and viewed the display boards. Some requested Chinese materials for their Chinese friends. Plenty of people from a distance saw highly hung banners about the twenty four million withdrawals from the Communist Party and they came over to find out more. A middle-aged woman said she wanted to sign in support as soon as she saw the words "Falun Gong." One man said, "You tell the truth to everyone. This is worthy of praise. I hope you succeed in your efforts soon."

“Holland: The Twenty-four Million Brave Souls Who Quit the CCP Are Supported in Amsterdam (Photos)”

“Malaysia: Revealing the Facts about the Persecution of Falun Gong in the Small Town of Sitiawan (Photos)”