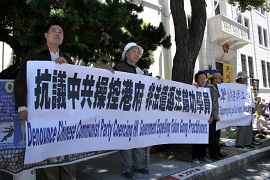 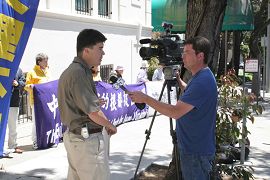 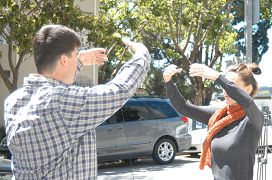 Someone is learning the Falun Gong exercises

Zhen Wenbiao, a practitioner from San Francisco, said, "The Hong Kong government doesn't allow 1000 practitioners, all of whom have legal travel documents, to enter Hong Kong. This shows that the 'one country, two systems' policy is a lie. The CCP is controlling Hong Kong very tightly."

Zhen Wenbiao said, "The CCP is afraid of the lawsuit against Jiang Zemin filed in Hong Kong, so it has tried to keep practitioners from entering Hong Kong. This is the biggest deportation incident in the history of Hong Kong and has exposed the CCP's blatant violation of human rights."

Nie Mixue, a citizen from San Francisco, was shocked by the persecution of Falun Gong. She said that everybody is entitled to freedom of belief and that the peaceful way that Falun Gong practitioners appeal for their belief is great. She condemned the CCP for the deportations in Hong Kong.