On July 19, 1999, the head of the Chinese Communist Party (CCP) Jiang Zemin launched the persecution of Falun Gong. A few days later, a Falun Gong practitioner in his eighties in Chiayi walked out of a Fa-reading room with a big stack of paper in his arms. He told his fellow practitioners, "I am old. I don't know computers. But I can write letters. I will tell the people in Mainland China that Falun Gong is good. The CCP shouldn't suppress it."

In the mean time, Falun Gong practitioners around the world started a journey of truth-clarification, exposing the evil nature of the persecution. Practitioners in Chiayi have joined the stream of calling for justice.

Falun Dafa started spreading the Fa at the end of 1999. Falun Gong practitioners realized they should spread the benefits of Falun Dafa to help more people know about it, and to expose the evil persecution. Several practitioners headed for Ali Mountain by van.

When they held their first nine-day Falun Gong lecture series in Ruili, many people were drawn to it on the very first day. They were curious about the miracles of Falun Gong. A Falun Gong practitioner went to pick up a villager who had had stroke. The villager couldn't lift his hand after the stroke. When his family didn't want him to go, he surprised them by lifting his arm. Everyone was shocked. On the fourth day, more than twenty people showed up for the morning exercises. More joined the Fa-study that evening. It was a peaceful atmosphere even though it was cold.

Spreading the True Story of Falun Gong by Internet and Phone

Falun Gong practitioners formed teams to tell the story of Falun Gong to Mainland China by Internet, phone, instant messenger and fax. They didn't want to leave out anyone in China. If a phone number didn't go through during the day, they would try at night. If a fax didn't go through by Internet fax, the number was passed to the manual fax team. 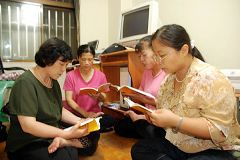 A practitioner summarized the record, "The call success rate has increased from 60% in May to 95% in December. It dropped to 60% in the week before the Chinese New Year because a lot of numbers weren't answered. I made it up on January 8 and reached a 95% success rate again. My wife and I helped each other. We don't want to leave any number out."

Spreading Stories of Cultivation by Radio 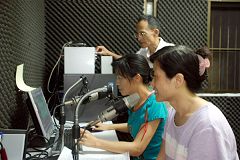 Forum about Nine Commentaries on the Communist Party

Falun Gong practitioners were invited to play the video of the Nine Commentaries on the Communist Party and hold a discussion at the Home of Honorable Citizens of Baihe. The activity further exposed the evil nature of the CCP to the elderly people from Mainland China. More than one hundred honorable citizens carefully watched the video.

Mr. Chen, who was originally from Yunnan Province of Mainland China, said that the video cheered his heart because it completely exposed the vileness of the CCP. He said that his grandfather used to be a land owner, and the CCP took everything from him and broke up his family. Mr. Chen has two brothers living in China. He said he would let them know about the Nine Commentaries and persuade them to quit the CCP.

Because of the open tourism policy in recent years, many people from Mainland China have been able to travel to Ali Mountain. Falun Gong practitioners in Chiayi realized that this was a great opportunity to directly tell the people the true story of Falun Gong, so they held a photo exhibition called "Falun Dafa Disciples Validating the Fa" at Ali Mountain for twenty-two days in January 2006. One hundred and twenty-six photos were taken up the mountain, which has an elevation of more than two thousand meters (>6560 ft.). The photo exhibition attracted large groups of tourists from Mainland China. 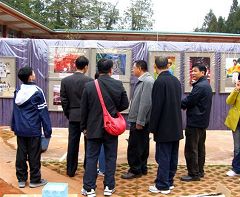 One Falun Gong practitioner who guided the photo exhibition said, "Each person who looked at the photos was shaken. The photos showed lectures by the founder of Falun Gong, group exercises, word-forming in Taiwan, truth-clarification activities around the world and the torture of Falun Gong practitioners in China. Visitors of the exhibition were touched even when they didn't say a word. You could tell from their faces."

Ali Mountain is a hot tourist spot for people from Mainland China. Falun Gong practitioners in Chiayi took turns staying at Ali Mountain in order to clarify the truth to the visitors and persuade them to quit the CCP.

Some practitioners walked to different sightseeing spots to tell Chinese tourists about the benefits of Falun Dafa and about the evil nature of the CCP. Others set up a booth with truth-clarification materials at the tour bus parking lots. A Falun Gong practitioner said that an average of three or four people quit the CCP every day. 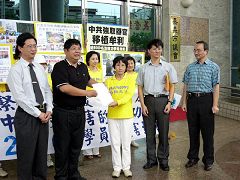 Legislator Sandy Yen said that after the organ harvesting and the violent deportation, some people still have illusions about the CCP. She showed great concern over the deportation incident.

Lai Wan-jen, Senator of the Chiayi City Government, expressed his strong condemnation of the Hong Kong government and strongly protested the CCP on behalf of the city government.

City Councilor Tsai Wen-hsu said, "I think the human rights condition in Hong Kong has unbelievably gone back to the nineteenth century. What is the CCP afraid of? Falun Gong practitioners in China have been imprisoned and tortured. The most horrible is organ harvesting from living practitioners." Mr. Tsai said he would stand on the side of Falun Gong to fight for human rights. 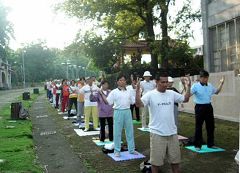 Many local residents go to Chung Shan Park to walk in the morning. A group of Falun Gong practitioners just finished their exercises, and one older gentleman walked lightly along the row of maple trees with a sitting pad in his arm and disappeared into the morning fog.

“Taitun, Taiwan: Falun Gong Practitioners Call for an End to the Persecution (Photos)”