Falun Gong practitioners held a rally in Jongmyo Park followed by a parade in downtown Seoul on July 17, 2007, to protest and expose eight years of persecution by the Chinese Communist Party (CCP). 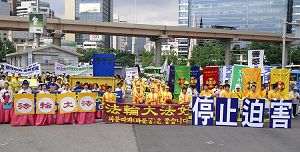 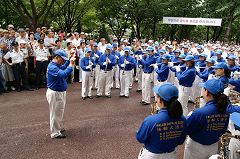 The Divine Land Marching Band at the rally

The Divine Land Marching Band in the parade. 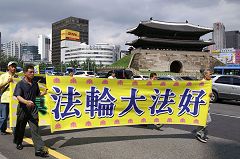 The parade at Sungnyemun Gate, a landmark in Seoul 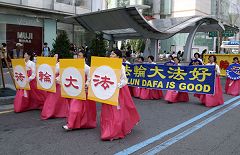 Waist-drum troupe in the parade 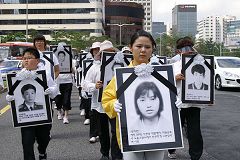 In memory of Falun Gong practitioners who died from the persecution 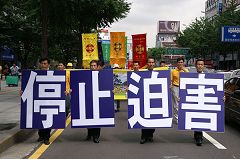 Practitioners called for an end to the persecution 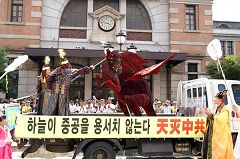 Seven organizations participated in the rally this year, and their representatives gave speeches. The most impressive was the speech by the representative of the Citizens' Union to Counteract National Crisis. He said, "The persecution of Falun Gong has made people see clearly the nature of the CCP and the end of the CCP. It is the time to eliminate the CCP. I hope China, which has blessed the world with its splendid culture, will regain its former glory by disintegrating the CCP." 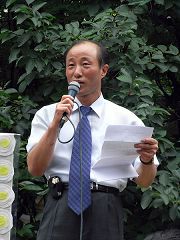 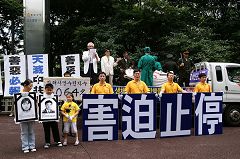 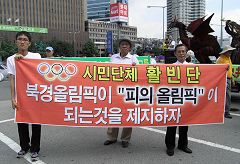 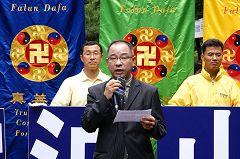 A representative of a Korean organization to help the poor, known for its unique demonstrations, gave a passionate speech about exposing the CCP's persecution of Falun Gong and boycotting the Olympic Games in Beijing if it fails to stop persecuting Falun Gong.

Only the CCP Persecutes Falun Gong

Practitioners from China who had broken free from the persecution had strong feelings. Mr. Kim said, "I had to do the exercises secretly in China because of the persecution. My brother was heavily fined for practicing Falun Gong. Korea is a land of freedom. I am very happy I can openly practice Falun Gong. I have regained my health."

Another said, "A Falun Gong practitioner in China lost his vision in jail due to persecution. His request to see his mother was turned down by the jail. His mother died at home. Because no family was taking care of her, she deteriorated. I feel so lucky that I can have the freedom to practice Falun Gong!"

After the publication of the Nine Commentaries on the Communist Party at the end of 2004, Service Centers to Quit the CCP were established in Korea in response to the tide of people wanting to quit the CCP. Many volunteers at the centers can't speak Chinese, but many Chinese have seen clearly the nature of the CCP and taken the initiative to quit the CCP and its related organizations.

A representative of the service center said more and more Chinese people were awakening. The number of people that have quit has increased in Seoul, and the impetus spread to other places. Some quit the CCP at the rally.

The rally happened to fall on the anniversary of the Korean Constitution. Many residents of Seoul showed concern at the rally.

An elderly gentleman said that Korean people had the experience of war with North Korea and knew the nature of the CCP very well. "The CCP's persecution of Falun Gong is intolerable and barbarous."

Another local resident said, "It isn't that I don't know the evil Communist Party. But it is still hard to believe that a barbarous crime like harvesting organs from living people can still exist. My home town is in North Korea. My family suffered great loss during the invasion of the Communist Party."

Falun Gong practitioners held a parade on the busy streets of Seoul, ending at the train station.