Hong Kong: People from All Walks of Life Support Elimination of the CCP and Stopping the Persecution (Photos)

On the afternoon of July 14, 2007, nearly 500 Falun Gong practitioners held a rally and parade with the theme, "Disintegrating the CCP and Stopping the Persecution." They called on people from all walks of life to support eliminating the Chinese Communist Party (CCP) and putting an end to the eight-year persecution of Falun Gong. Several social personnel came to support the effort. They condemned Zeng Qinghong and his gang for ordering the deportation of practitioners prior to July 1, and pointed out that the incident shows that the CCP has extended its influence into Hong Kong. Mr. Szeto Wah, president of the Hong Kong Residents Supporting China Democratic Movement Union praised Falun Gong practitioners' efforts in opposing the persecution, and pointed out that what the CCP fears most is people having genuine beliefs. Former Legislative Council member and priest, Mr. Fung Chi-wood pointed out that it is a heavenly principle that good will be rewarded and evil punished. He called on relevant officials to immediately stop the persecution of Falun Gong. 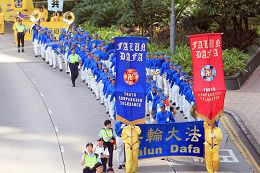 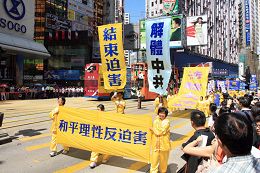 Grand parade themed "Disintegrate the CCP and Stop the Persecution" 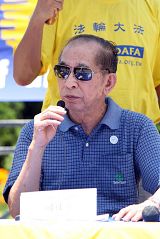 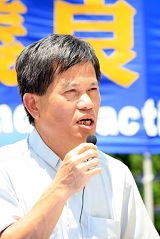 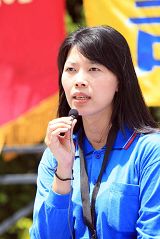 Taiwan Falun Gong practitioner Ms. Wen tells of how she was violently deported by the Hong Kong government prior to July 1 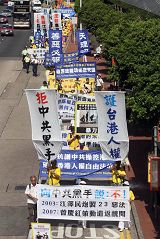 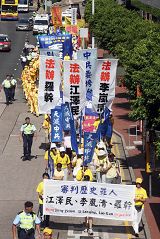 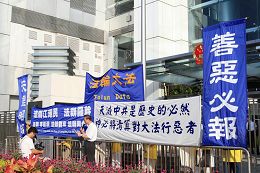 Falun Gong practitioners called on the Hong Kong government not to bow to the CCP's dictatorship and not to follow the CCP in persecuting human rights.

Vice-president of the Coalition to Investigate the Persecution of Falun Gong (CIPFG) Asia Branch, and president of the Hong Kong Residents Supporting China Democratic Movement Union, Mr. Szeto Wah pointed out that what the CCP fears most is people who have genuine beliefs. He praised the spiritual strength of people with true beliefs. They can persist in their faith and closely unite with those who share the same belief. Such faith, persistence and unity are also what the CCP fears the most. Falun Gong practitioners are the most upright, sacrificing and disciplined among civil groups that he knows. That is why the CCP severely persecutes them.

Regarding the recent large-scale violent deportations, Mr. Szeto Wah believes that the incident shows that the CCP's negative influence has extended to Hong Kong: "One country, two systems" has turned out to be "one party, two systems." A "high degree of autonomy" has become "rule by special agents." Many Hong Kong people have not realized this incident, because it has not touched upon their own personal benefits.

He also hoped that Hong Kong citizens will recognize the facts and be vigilant about expressing their disapproval of their government's actions.

Another member of the Coalition to Investigate the Persecution of Falun Gong (CIPFG) Asia Branch, legislative council member Lin Yongran, praised the Falun Gong group for their unremitting spirit of opposing the persecution over the past eight years. He expressed that the illegal deportations conducted by the Hong Kong government are very troublesome.

Former Legislative Council member and priest, Mr. Fung Chi-wood expressed sadness over the deportations. He called on relevant officials to stop the persecution. He said, "Anything that is offensive to God and reason, and anything that damages human rights and harms people's minds and souls will be inevitably punished. Heaven will punish these behaviors and these people...It is not that what the law permits will avoid punishment from Heaven. Don't be so foolish as to think that there is no retribution." He called on the Hong Kong people not to be silent, but to stand on the side of truth and to help the oppressed.

A council member of the Eastern District, Mr. Tseng Jian-cheng pointed out that the CCP regime is widening the gap from the ordinary people, becoming even more autocratic.

Council member Chen Weiye, who was unable to attend in person, expressed his support through a video. He encouraged Falun Gong practitioners not to succumb to the CCP's autocratic power, and to continue persisting in their beliefs.

Falun Gong practitioner Chu O Ming, one of the plaintiffs in the lawsuit against the chief culprit in the persecution, Jiang Zemin, said that he witnessed the crimes of the CCP in the persecution of Falun Gong personally, because he was sentenced to five years in 2000 for filing a lawsuit against Jiang. He expressed his hope that more citizens will be able to see clearly the CCP's evil nature, and not become its scapegoat.

Many of the Taiwanese practitioners participating in this activity were those who were victims of deportation by the Hong Kong government prior to July 1. This time, they entered Hong Kong once again.

Ms. Wen recounted at the rally that on June 30, when she was denied entry and detained at the Hong Kong airport, she was violently treated by the police officers because she refused to use the bathroom with the door open. Four riot police officers entered the detention room, pushed open the door of the bathroom and pulled her down on the ground. Then they dragged her to a place and placed her on an object. She looked up and saw riot police, including male and female officers.

Ms. Ma recounted her two experiences of being deported. The first deportation was on June 25 when she went to Hong Kong to take part in activities. On July 1, when she went through procedures to board her plane, she was told that her ticket was canceled. The Taipei Travel Agency told her that her seat on the plane was still available. Later, her friend in the travel agency checked and told her that it was a political incident, with no way to make the change. He was unable to help.

She said her purpose for coming to Hong Kong this time was to expose the wrongdoings of the Hong Kong government under the coercion of CCP official Zeng Qinghong. She also wanted to take the opportunity to call on people to work together to resist the CCP's persecution.

Taiwan Falun Gong practitioner Mr. Chuang was also deported on June 29. He protested the authorities violation of "one country, two systems." He pointed out that the persecution of Falun Gong is only happening in China, and nowhere else in the world. The incident happening now in Hong Kong shows that the CCP has extended its influence to Hong Kong.

The rally lasted for over an hour. Afterwards, there was a parade led by the Divine Land Marching Band. The procession started off from Victoria Park and marched westward to the Chinese Liaison Office. In addition to large banners reading "Falun Dafa Is Good," and "Heaven Will Eliminate the CCP," there were also many small banners and flags. A Chinese-style waist drumming troupe also performed along the parade route. Many people stopped to watch and take pictures, and accepted materials from practitioners. Many tourists from China saw the parade and practitioners for the first time.

After a two-hour march, the parade procession reached the Chinese Liaison Office. A representative read a public statement outside the main entrance, and then everyone peacefully left.

“The Persecution of Ms. Gao Chunlian in Baoding Labor Camp”