Malaysia: Practitioners Protest Bo Xilai's Crimes in the Persecution of Falun Gong During His Visit to Kuala Lumpur (Photos) 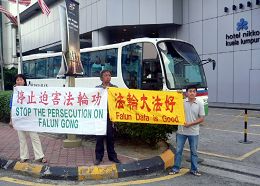 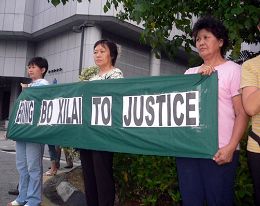 Around 7 p.m., no doubt pressured by China embassy officials, two police officers asked the practitioners to wrap up their banners. The practitioners explained the purpose of the protest. The police stubbornly wanted them to take down the banners, so they did, and then patiently awaited the arrival of Bo's motorcade.

One practitioner later said that he asked a policeman who wanted to take down his banner, "Ten years from now, if your son or grandson reads the history of the persecution of Falun Gong, what you will say when they ask you what you did now?" The policeman was shocked and did not grab the practitioner's banner. The practitioner said he reminded the police not to submit to the pressure to commit wrongdoings. Everyone must bear responsibility for what they have done.

Practitioners believe that the forced removal of a billboard worded "Falun Dafa is Good" beside the busy road in Kuala Lumpur was related to Bo's visit. The billboard had been up for years.

Bo Xilai followed Jiang Zemin in the persecution of Falun Gong when he was governor of Liaoning Province and mayor of Dalian City. He faces lawsuits in the USA, Canada, the UK, Germany, Ireland, New Zealand, Russia, Australia, Korea, and Spain for torture and other crimes against humanity.