Denmark: Let the Lighting of the Olympic Torch Become a Hope for Improving Human Rights (Photo)

On the 7th and 8th of July 2007, the Danish branch of the Global Service Center for Quitting the CCP and the Danish China Human Rights Internet Organization held a joint rally and parade at the largest square in Copenhagen, supporting over 23 million brave Chinese people who have quit the Chinese Communist Party and its affiliated organizations. At the rally, European member of the CIPFG (Coalition to Investigate the Persecution of Falun Gong in China) Leif Bork Hansen spoke. 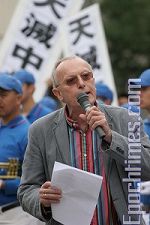 Leif Bork Hansen said, "In the 1936 Berlin Olympic Games, Danish athletics were refused entry because the then Nazi regime was persecuting Jews. That year's Olympics were used by Hitler as an occasion to glorify himself. The 2008 Olympic Games will be opened in China's Beijing. What significance will this Olympic Games have? This is our responsibility."

He said, "As a Jew, Italian chemist and writer Primo Levi was imprisoned in the notorious Auschwitz Concentration Camp during World War II. He later exposed to the world, in his book, the terrible cruelties and suffering that went on in the camp unbeknown to the outside world. People detained in the concentration camp nearly lost all hope of survival."

Mr Hansen continued, "Every time we openly discuss human rights problems in China, we have to mention the hidden labor camps and concentration camps where Falun Gong practitioners are detained and their organs are harvested while they are still alive. We thought we had gotten rid of such things over a hundred years ago. However this terrible atrocity has now re-appeared. This is the same as the persecution of Jews in the Nazi concentration camps, or Stalin's concentration camps prepared for dissidents."

He called upon the Danish Olympic Committee and Crown Prince Frederik to turn the 2008 Beijing Olympic Games into a grand meeting that respects human rights.

Hansen said, "This is the true Olympic spirit. This is a victory for justice!"

"Immediately release all Falun Gong practitioners who are detained in the forced labor camps, prisons and secret concentration camps where their organs are harvested while they are alive."