Representatives of Falun Gong practitioners in Taoyuan who were deported by the Hong Kong government gathered to petition legislator Mr. Huang Cong-yuan at noon on July 14, 2007. Regarding the 500 Taiwanese practitioners who held valid visas but were denied entry and forcefully deported by the Hong Kong Immigration Department when they arrived in Hong Kong prior to July 1, the petitioners asked Legislator Mr. Huang to protest to the Hong Kong government and the behind-the-scenes mastermind, the Chinese Communist Party (CCP), on behalf of the Taiwanese people. 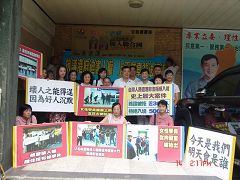 Mr. Liu, who teaches middle school, said that on the evening of June 29, at Hong Kong immigration, 15 practitioners were detained in an isolated area where their physical freedom and freedom of speech were restricted by a human wall [formed by police officers]. The Hong Kong government acted in an inhumane fashion.

Software engineer Mr. Lu said that on the evening of June 29, when he was about to board the plane to Hong Kong, he was stopped in front of the plane. At the time, he had gone through all procedures and his airline ticket had been checked as well, but he was told that his visa was invalid.

Legislator Mr. Huang said that he had learned about the situation from the media. He said that Hong Kong's illegal deportation case this time actually may not be a bad thing for Falun Gong practitioners. The CCP's persecution of human rights and its suppression of a civil group, through extensive coverage by the media, including newspapers and magazines, have been exposed on a large-scale, and may conversely help people see clearly what kind of political party the CCP really is. Some Taiwanese people who still have illusions about the CCP can clear-headedly ponder the situation.

Eight years have passed since the CCP and Jiang regime's began their genocidal suppression, and Falun Gong practitioners have been resisting the persecution persistently and in a peaceful and rational manner. During the deportations, practitioners were not scared. What strength has enabled them to be so persistent and unrelenting? A person surnamed He said, "Our purpose in going to Hong Kong was to raise people's awareness, work together to resist the genocidal persecution of Falun Gong practitioners, and stop the CCP's atrocity of harvesting organs from living Falun Gong practitioners. The international community and human rights organizations are all concerned about this matter of human rights violations, violence and the Olympics taking place concurrently."

Legislator Mr. Huang said that human rights has no boundaries, and that this is a topic of widespread concern. He said that as a member of the Taiwan Solidarity Union, he is also a victim in that the CCP also refuses to issue visas to members of that organization. Mr. Huang would like to stand up to express his position to the media. He would like to speak righteously to the world through the media, in hopes that more people will learn about the CCP's unreasonable behavior so that it will be widely condemned.

A practitioner surnamed Tsai said that the deportation case proves that the CCP has contaminated Hong Kong's freedom and democracy. The Hong Kong government succumbed to orders from the CCP in its shabby and illegal treatment of innocent Taiwanese people. The Hong Kong government has abused the Taiwanese people's personal freedoms, their freedom to travel, their freedom of religious beliefs and assembly, and their freedom to express their minds. Today, the victims are Falun Gong practitioners. Who will be next? Good people's silence effectively condones bad people's actions.Practitioners said, just like President Chen Shui-bien said days ago, that only when the CCP completely collapses and disintegrates will the world truly be peaceful. Currently the number of people who have announced their resignations from the CCP and its affiliated organizations is increasing daily at a rate of 30 to 40 thousand per day. As of today, 23 million people have quit the CCP and its affiliated organizations. The CCP's elimination is truly imminent.

“Denmark: Let the Lighting of the Olympic Torch Become a Hope for Improving Human Rights (Photo)”