People from all walks of life from the Bay Area paraded on major streets in San Francisco on July 14, 2007, supporting the 23 million Chinese people that have withdrawn from the Chinese Communist Party (CCP). After the parade, attendees held a rally in Garden Park in Chinatown to promote "Quit the CCP Month," originated by the Global Quitting the CCP Service Center. Speakers called on residents to recognize the CCP's evil nature and to quit the Party to keep safe. 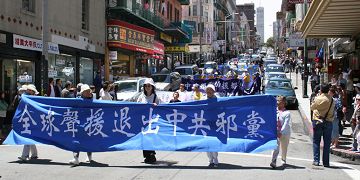 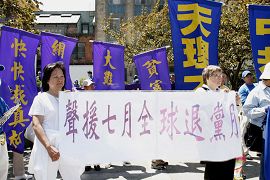 July is "Quit the CCP Month" 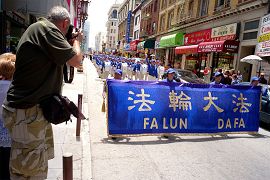 The "July Is Quit the CCP Month" effort was originated by the Global Quitting the CCP Service Center, and Chinese from many countries outside of China have responded. Since the beginning of July, large scale rallies and parades have been held in America, Germany, Britain, New Zealand, Australia, Japan, Korea, and Hong Kong.

A few speakers used their own experiences to expose the CCP's persecution of Chinese people, while others called on Chinese people to recognize the CCP's evil nature and quickly withdraw from it to keep safe. They encouraged people to abandon Communist tyranny. "Promoting the Nine Commentaries and quitting the CCP is the most urgent mission and responsibility at this historical moment," said one speaker 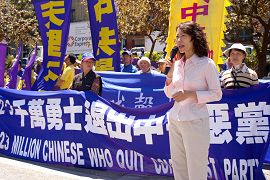 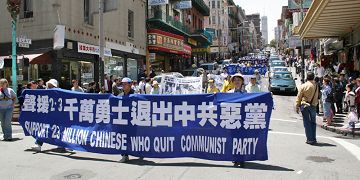 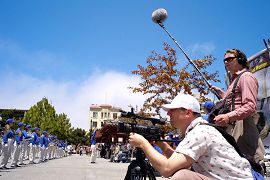 Mr. Ma Youzhi, a representative from the Northern California Quitting the CCP Service Center, said that the CCP's persecution of Falun Gong practitioners who cultivate the principle "Truth-Compassion-Tolerance" has enabled people to clearly recognize the true nature of the CCP. "The Party is doomed. People will soon see that righteousness will defeat evil."

Ms. Zheng from San Francisco said that Falun Gong has been persecuted for eight years, and for all that time, practitioners have been saving people. She told how, in 2002, a large stone found in Guizhou Province in China was found to have the Chinese characters for "Chinese Communist Party Die" on it. "Experts have established that the stone was formed 200 million years ago. This was a forewarning to let people know that CCP will dissolve. Falun Gong practitioners are promoting quitting the CCP and all its affiliated organizations to save people's lives."

Ms. Zheng said that Chinese people choose believe that this stone exists even though they haven't seen it in person. "For a person to announce his or her resignation from the CCP and its affiliated organizations is like getting free insurance from God. Some people think China's economy is strong and that the CCP is improving. Actually, the Communist Party is like a cancer patient that has reached the final stage when the cancer has spread to all his organs. So no matter how attractive the clothes he puts on, he can't change his fate. Only withdrawing from the CCP can keep people safe.

Ms. Cheng spoke about her experience being tortured after she appealed for Falun Gong in China. She said she used to be very sick, but Falun Gong returned her to good health and changed her into an honest and kind person. When she appealed for Falun Gong, she was jailed. In jail, she was forced to stand for long periods of time, kneel, and sleep on bare cement. She had her head knocked against a wall and endured other tortures. She demanded the immediate end to the persecution of Falun Gong. 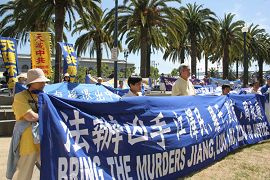 Ms. Zhan from the Bay Area said that a confidential document from the China National Security Bureau in April has excluded millions of people, both Chinese and foreigners, from the 2008 Olympics. Ms. Zhen believes this move has already spoiled the spirit of the Olympics. "The Chinese Communist Party is afraid the world will see how it suppresses its people, so it is attempting to use the Olympics to conceal its crime of genocide of Falun Gong practitioners." Ms. Zhen called on people to abandon their fantasies about the CCP.

A family of three from Sacramento came to San Francisco to shop in Chinatown. The mother saw the rally in the park and expressed her support. She read the truth clarification materials she was handed and was shocked to realize the extent of the persecution of Falun Gong in China. She said, "It is hard to imagine persecuting a person, let alone a country persecuting a group of people."

She said she remembered once hearing an NBA basketball player say they should not play in China as long as the persecution continues.

She continued, "I knew China was exporting poisonous food and toothpaste to America and other nations, but now I know about the persecution in China, so I am not going to buy products made in China."

Ms. Maya Hoeks, a tourist from Denmark, was excited to see so many people rallying in support of quitting the CCP. She said she cares about human rights and has heard about the CCP's crime of organ harvesting from living Falun Gong practitioners. She believes everyone has the right to his or her own belief, and she expected to see a day without the Communist Party to come soon.