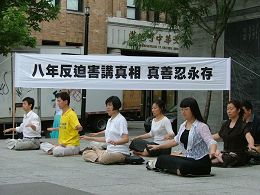 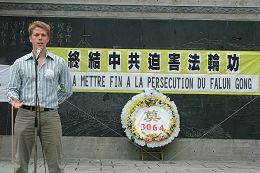 Local citizens are shocked by the CCP's brutality.

Witness to the persecution

Shen Yue, a Chinese student from Shenyang, exposed the persecution with his family's experiences.

He said: "My mother and her three sisters started practicing Falun Gong in 1997. After the persecution was launched, they stepped forward to clarify the facts of Falun Gong to the public. They were all arrested. In prison, they were badly tortured and insulted. The prison even charged them 50 yuan every day."

"In 2001, my mother was sentenced to two years in the Women Labor Camp in Kaiping District, Tangshan City. Two years later, she was released, but has been watched 24 hours a day. Her sisters are still imprisoned. On June 30, 2007, my mother was arrested again. The policemen took away her computer." Shen Yue said: "The persecution has been going on for eight years. Here, I call upon all kind people to stand up and help us to stop this brutal persecution."

Witness to the failure of the suppression

Zeng Jun, who has practiced Falun Gong for a year, said: "I heard about Falun Gong when I was in China. All I heard and read were the slanders attacking Falun Gong. Based on my understanding of the evil CCP, I told myself that Falun Gong must have been framed. Later, I came to Canada, where I saw practitioners' living by the principles of "Truthfulness-Compassion-Forbearance." Gradually, I started practicing it too. This shows that the CCP's suppression of Falun Gong has failed."

Clarifying the facts of Falun Gong to the public

A Falun Gong practitioner who has been clarifying the facts of Falun Gong in Chinatown for a long time gave a speech. He said: "When I do the exercises in Chinatown, I feel sad, because people in China don't have the freedom to do the same thing."

He told the audience: "My brother in China told me that the policemen in my hometown threatened him, telling him that they know everything that I do in Canada. My brother asked me not to come back to China. This shows that there are spies in Chinatown, Montreal. I believe that there are spies in the audience today. I want to ask you--don't you feel ashamed of yourself? How can you tell your children about your job? You know very clearly that the CCP is about to come crashing down. Don't you worry about your future? I hope that you will not help the evil any more. The CCP is afraid of Falun Gong practitioners clarifying the facts, so I will keep doing it in Chinatown."

Zhu Yexin said: "Falun Gong practitioners have kept clarifying the facts to the Chinese community. They have written to the community every week, and visited them one by one to expose the persecution. More and more people have learned the facts and people's attitude towards Falun Gong has changed. More and more Chinese people started accepting our materials and some people praise Falun Gong in public. Although the CCP is still controlling the community, people are friendly to us and they admire us."

Support the resistance to the persecution

Many local people learned the facts of the persecution at the rally and signed their names to support practitioners.

Henry Fernaud, a local citizen, gave a speech to support Falun Gong practitioners and encourage them.

Four tourists from Florida learned the facts about Falun Gong and said they would expose the persecution to more people in Florida.