(Clearwisdom.net) On July 5, 2007, Falun Gong practitioners from Stockholm and the Service Centre for Quitting the Chinese Communist Party (CCP) rallied at the Chinese Embassy to voice their support for the lawsuit brought by Hong Kong practitioners against China's former President Jiang Zemin, who is the leading culprit in the persecution of Falun Gong. They also condemned the Hong Kong government for yielding to the Chinese Communist regime's pressure as it celebrated the 10th anniversary of Hong Kong's return to China. Hong Kong authorities deported some 500 Falun Gong practitioners, an act that violates human rights. In the meantime, they were also there to support Global Quitting the CCP Month and urge the public to realize the true nature as soon as possible so that they are able to withdraw from it and choose a bright future for themselves. 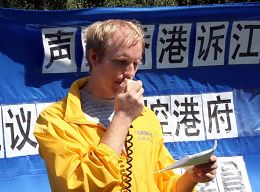 A practitioner speaks at the rally 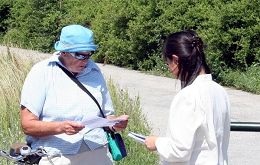 Explaining the facts to a passer-by

On the roadside opposite the Chinese Embassy, Falun Gong practitioners displayed banners reading "Support the Lawsuit against Jiang Zemin; Protest the Chinese Communist Regime's Roles in the Illegal Deportation of Falun Gong Practitioners in Hong Kong; and, Support 23 Million Chinese Quitting the CCP. They attracted a lot of attention from passersby. Many people stopped to view the banners and ask for more information. They were shocked to hear about the Chinese Communist regime's brutality.

Ms. He from the Service Centre for quitting the CCP stated: "The large-scale deportations by Hong Kong Immigration indicate that the Chinese Communist regime is in a frenetic state, otherwise Hong Kong would not have taken this despicable measure at the expense of its image in the international community. This incident also showed that the Communist regime is on the brink of collapse. Since the Chinese Communist regime started to persecute Falun Gong group believing in the principles of "Truthfulness, Compassion and Tolerance," it has infuriated not only the people around the world but heaven as well. After the publication of the "Nine Commentaries on the CCP," more and more people at home and abroad have come to realise the intrinsic evil nature of the CCP. So far, there have been over 23 million people withdrawing from the CCP and its affiliated organizations and the figure is still on the rise. Indeed, this is a historically critical moment."

“United Daily News (Taiwan): Conference Suggests One Letter Per Person Condemning the CCP and Hong Kong Government for their Actions”