On June 3, 2007, citizens from Yilan County, Hualien County and Taitung County in Taiwan held a rally and parade to support 22 million withdrawals from the CCP. Two van tours took off from Yilan and Taitung, and joined in Hualien. Attendees held a press conference in front of the City Council Plaza in Hualien. At 11:50, attendees started a car-parade along Chungcheng St., Chungshan St., Chunghua St, train station and Dehsing Stadium. 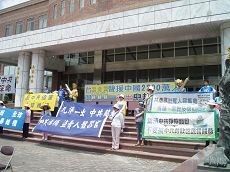 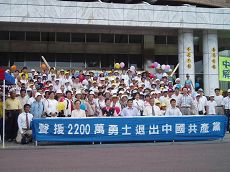 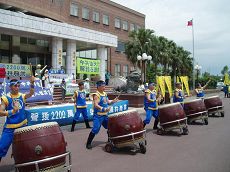 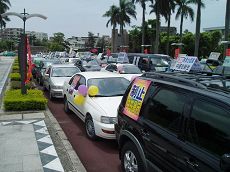 Mr. Chen Kuofeng, a doctor from Yilan County, expressed that the CCP is not the same as China, and the CCP ruined the traditional Chinese culture. He pointed out that all the tyrant powers in history crashed down finally, including the communist powers in Russia and Europe. He said the CCP is about to die since more than 22 million Chinese people have quit the party and he called upon more people to join them. 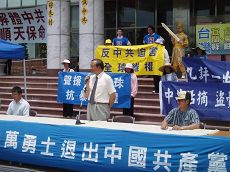 Mayor of Hualien, Mr. Cai Chita, gives a speech to support the activity

The mayor of Hualien, Mr. Cai Chita, gave a speech to support the activity. He expressed that he admires the courage of the withdrawals. He said that the CCP is about to crash and he hoped that the Chinese people would have a correct understanding of the situationand contribute to peace by condemning the violence. 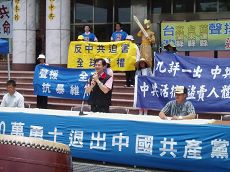 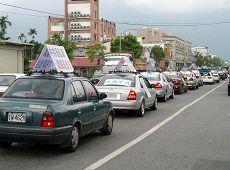 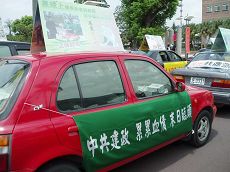 Fact-clarifying banner on a car

Professor Wang Tingsheng from Tunghua University, a former congressman, came to support the activity. He expressed that Falun Gong practitioners' anti-persecution activities are righteous and he has attended the anti-organ-harvesting activities. He was proud that so many people came to support the withdrawals from the CCP. He said, "We are here today to tell the Chinese Government that the brutal persecution must stop. The CCP's brutality will bring disaster to China." He expressed that through the anti-persecution activities, the attendees are contributing to peace in China.

Ms. Chen Huiru, a lawyer from Yilan County, was glad to have a chance to support the withdrawals from the CCP. She expressed that she has been concerned about the persecution of Falun Gong, which is against international laws. She expressed that the CCP's wicked behaviors must be stopped and the CCP will soon collapse. She called upon the attendees to punish the murderers involved in the persecution with laws.

Mr. Hong Tunghsiang, the principal of Huideng High School in Yilan, expressed that the activity is very encouraging. He said that every educator should know about the CCP's evil nature. He said that people should not let a government, which violates human rights and harvests organs from living people, to hold the Olympic Games. He called upon people in the education communities to help stop the CCP's persecution.

Ms. Huang Jinding had worked in Mainland China for four years. He experienced a lot of the CCP's illegal behaviors. He said that many Taiwanese businessmen have lost money or even went bankrupt due to the CCP's illegal behaviors. He pointed out that more and more people now recognize the CCP's nature. He predicted that the number of withdrawals will increase and the CCP will collapse soon.

Mr. Liu Chuohao, the former deputy mayor of Taitung, sent his representative, Mr. Lin Kaowen, to support the rally. He expressed that people should not be deceived by the economic development in China and should not ignore its human rights problems. Democracy in China is far from being realized, since people don't have the basic freedom of belief or speech. He expressed that the CCP is like a bomb and will bring disaster to the world, so the action of quitting the party is actually the salvation of peace in the world.

The attendees expressed that the activity will help more Taiwanese to recognize the nature of the CCP. The peace of China can only be realized if the CCP is gone.

“Islington Gazette (UK): Mother speaks out after her ordeal in Beijing labour camp”