Li Huaying is a nurse at Jianyang Hospital in Sichuan Province. Her mother is Dafa practitioner Ms. Hu Lingying. Huang Zurong, a surgeon at the same hospital, is the son-in-law of Hu. These two persons were poisoned deeply by the Chinese Communist Party (CCP). They assaulted and abused their mother many times. On November 29, 2006, Li Huaying reported her mother, who was practicing the Falun Gong exercises, to the police, causing Ms. Hu to be illegally arrested and detained in the Erehu Brainwashing Center in Ziyang. Ms. Hu has been transferred to Jianyang Detention Center. 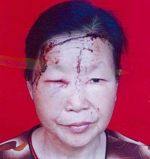 Injuries on Ms. Hu Lingying's head and face after she was beaten by Li Huaying

Ms. Hu Lingying is 66 years old. She began practicing Falun Gong in 1996, after which her sick body became healthy. Her neighbors and friends felt that she became younger-looking and kinder. Before 1999, many people admired her. The changes in Hu Lingying after cultivation made her children happy. They did not oppose their mother's cultivation. However, since the persecution began in 1999, due to the lies from the CCP, Hu's older daughter and son-in-law received pressure from their work units, and when combined with their pursuit of fame and gain, their attitudes changed. Along with the persecution by the CCP, they strongly opposed their mother practicing Dafa.

On December 20, 1999, Ms. Hu was arrested in a fellow practitioner's home in Jiajia Town and detained at the Jianyang Drug Rehabilitation Center. In the New Year of 2000, the leader of Jianyang Hospital and Li Huaying attempted to force Hu to write a guarantee statement, promising to give up Falun Gong. Hu refused firmly. In the yard, Li Huaying fiercely slapped her mother's face left and right. The leaders, policemen and 610 personnel were all there and no one stopped her. After that, Hu's face was extremely swollen. On the seventh day of the New Year, Hu was transferred to Mahaojie Detention Center in Jianyang City. In early February, Hu was fined 3,000 yuan and released. After Ms. Hu returned home, Li Huaying took Hu to her son Li Guoying's home, which is in Yunnan. Li Guoying, under pressure by the CCP, was also required to live separately from his mother for his own safety.

In July 2003, Ms. Hu was reported again and taken to the police station. Police ordered Li Huaying to take her back home. Li Huaying feared her mother going out, so she locked her in the home every day, like in jail. Ms. Hu firmly demanded that Li Huaying unlock the door. Li laid her hands on her mother unexpectedly. She opened the door, held her mother on the bed and assaulted her mother with an iron nail, attacking her head, back and upper body, causing her to bleed profusely. Her clothes turned red and her face was swollen. Li even said maliciously, "I would rather bring you down and I go to jail." Even though her mother was injured to this degree, Li did not send her for treatment and did not care for her.

Even in these trying days, Ms. Hu Lingying still had no resentment. She thought her children to be poor and pitiful, but she still took care of her family. She took care of the granddaughter by cleaning and cooking. Hu's tolerance, however, did not awaken her daughter's conscience and morality. Li reported her mother on November 29, 2006. Ms. Hu bore the double pain of being reported and assaulted by her own child and being persecuted by the CCP. As a mother, what agony this must be! Ms. Hu has been detained for five months.