CIPFG: Boycotting the Olympic Games 2008 for Human Rights Is Not Politics (Photos)

(Clearwisdom.net) At a press conference held at the Canadian Parliament on May 30, 2007, acclaimed Jewish scholar and chairman of the Organ Donation Committee of the Kidney Foundation for Eastern Ontario, and the chair of the "Coalition to Investigate the Persecution of Falun Gong in China" (CIPFG), Rabbi Reuven Bulka, declared that boycotting the Olympic Games 2008 is not politics, but a human rights issue.

Canadian Parliament Member Borys Wrzesnewskyj, said on May 30, "I am a supporter of this particular initiative (boycotting the Olympic Games) and I encourage all MPs and in fact parliamentarians around the world to take part in this alternative torch run." 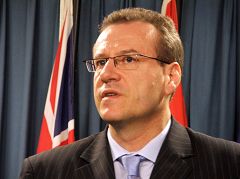 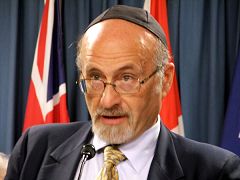 Acclaimed Jewish scholar and the chair of the "Coalition to Investigate the Persecution of Falun Gong in China (CIPFG)", Rabbi Reuven Bulka 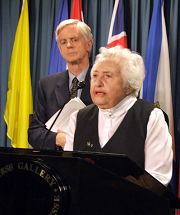 Support for Boycotting Olympic Games to Stop Genocide in China

Dr. Bulka said, "The Chinese government shouldn't be afraid of an investigation, and that's all that we are asking. And what is very clear is even that has not been forthcoming, and we are here today to give a warning in advance to the Chinese government, which includes our urging to them to stop the persecution of the Falun Gong immediately, to release all incarcerated practitioners, to stop the persecution of the friends and supporters and defense lawyers of Falun Gong Practitioners, and to hold negotiations with the coalition to allow for the investigation of what is going on, and obviously with the purpose of stopping completely this horrific practice of taking live organs from Falun Gong practitioners and making a multi-million dollar industry of this worldwide."

MP Wrzesnewskyj stated, "It is horrific when you read the reports to realize that in the very country that wants to showcase itself during the Olympics, these sorts of atrocities could be taking place today. I am a supporter of this particular initiative and I encourage all MPs and in fact parliamentarians around the world to take part in this alternative torch run."

Mr. Kilgour, the Former Secretary of State for Asian Pacific, said, "All of us hoped when China was given the games that human rights would improve in China. What I think is not well-known is the fact that human rights have significantly deteriorated in the country."

He continued, "Human Rights Watch, Amnesty International, Human Rights in China--virtually every independent NGO--has said the same thing: that human rights are getting worse, not better in anticipation of the games which are a little more than year away.

"The process of killing Falun Gong practitioners for their organs and then selling their organs very often to foreigners for huge amounts of money continues, and it's simply impossible in my view to have torture and killing going on in one part of Beijing and the games going on in another part of Beijing. The two are simply incompatible. It's totally incompatible with the Olympic spirit and it must not and cannot go on."

Simma Holt, the former Member of Parliament for Vancouver-Kingsway, said, "Genocide just sounds like a word, but the Chinese communist regime is taking body parts, taking body parts and selling them like they were McDonald's--you can get them cheaper if you buy two, and every time they take an organ from a living person, that person dies." Simma Holt received much support by the Chinese community in Vancouver-Kingsway.

Boycotting the Olympic Games Is a Human Rights Issue, Not Politics

On May 18, the Chinese Foreign Affairs Minister, Yang Jiehu, claimed, "A handful of people are trying to politicize the Olympic Games." In response to this, Dr. Bulka declared: "I think the point we need to emphasize, is that this is not politics. This is a human rights issue. This has nothing to do with politics. We are all foursquare and lovers of the Chinese people. As a rabbi I can tell you that many in our community have always enjoyed Chinese food. That's the thing that has sustained many of them for many, many years. We want to stop, not because of any politics but because there are innocent individuals who are being killed and we can't stand back and do nothing in the face of that. Anybody who says to you that this is politics, that's an absurdity."

Mr. David Kilgour said, "The games have been politicized by the government of China. I think some of you are aware of the bulletin that went out saying who would be allowed to go to China to see the games, how they'd be treated, and who would not be allowed. That bulletin is now a public document which is on a number of websites. It is so much contrary to the Olympic spirit that its hard to think of anything worse."

Regarding the above comment of Chinese Foreign Affairs Minister Yang Jiehu, MP Wrzesnewskyj said: "Its an absolutely ridiculous comment and even if we set aside the fact that tens of thousands of people in countries around the world have taken interest, even if we set aside the fact that Mr. Kilgour and Mr. Matas have traveled and met with parliamentarians, politicians, leaders of organizations and of countries in over 20 countries--even if we set aside those particular numbers, a handful of people? Oh my goodness, how many thousands are imprisoned in China and how many thousands have lost their lives due to this policy of organ harvesting of Falun Gong members? Its an absolutely a ridiculous comment which tries to diminish what in fact is taking place. And it's time for the propaganda to stop, and instead what they should be looking at is stopping this practice."

Dr. Torsten Trey, the spokesman of Doctors Against Organ Harvesting, said: "Just imagine if the Olympics would take place next year in Sudan or in another dictatorship like in the Nazi regime, would the whole world agree to have the Olympic Games in such a dictatorship? So the case with China is not a single case; it would apply in each country. And, as far as I know, when they invited the Olympic Games to China they said 'Give us a chance, so that we can improve human rights.' So they said it actually themselves. They set the rule, they set the standard to improve human rights, but what happened since 2001? For the past 6 years organs have been harvested from living people, so it's the opposite."

Dr. Trey said: "We are not setting up a new rule, we are just following what they said. They want to improve human rights, but they didn't and it's a basic right that we are talking about."

“New Hampshire: Mayor Frank Guinta of the City of Manchester Proclaims May 13, 2007 as Falun Dafa Day”