Eliminating Notions and Righteously Clarifying the Truth In Chinatown

(Clearwisdom.net) My old notions and my attachment of fear were fully exposed during the Chinatown activities on World Falun Dafa Day. I would like to share with everyone here, and completely eliminate these bad notions that obstruct me from saving sentient beings. This is also for your reference on how to clarify truth in Chinatown. 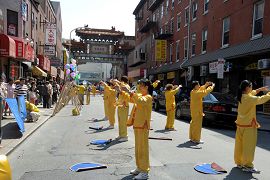 On 2007 World Falun Dafa Day, in front of the Friendship Gate, Philadelphia practitioners did group exercises, spread the Fa, and clarified the truth

Chinatown in Philadelphia is very crowded, and does not have any spacious fields or parks for clarifying the truth. For the past several years we've been passing out truth-clarification materials on a street corner, sometimes with a table there. Even for big gatherings in celebrating the tide of quitting the Chinese Communist Party (CCP), we gave our speeches from that street corner. Everyone felt that the strength of truth-clarification in Chinatown was not strong enough, but it was not getting any better. Master said in "Fa Teaching at the 2007 New York Fa Conference" in answering a student's question:

"How many people have really gone to San Francisco's Chinatown to clarify the facts? If you haven't persisted at it and there have only been a few people involved, of course things won't change! Given that there are so many disciples in the Bay Area, why don't you make that area a priority and put in some effort there?"

This also deeply touched many Philadelphia practitioners' hearts. How can we break through the current situation, and take the strength of truth-clarification in Chinatown to the next level?

On World Falun Dafa Day, the Philadelphia practitioners got a permit for the busiest spot in Chinatown to show how wide-spread Falun Gong is in the world, and to display truth-clarification banners about the CCP's persecution of Falun Gong. The Nine Commentaries on the Communist Party video was playing the entire time. At the same time, there were practitioners doing exercise demonstrations, and other practitioners teaching people how to fold paper lotus flowers. The activities attracted many people, including Chinese people. Some came to us to learn the truth about the persecution, some eagerly wanted to know more about Falun Gong, some began to learn and practice the exercises, and some quit the CCP at the site. The atmosphere was just great.

However, during the planning stages for this event, when a western practitioner first made this suggestion, I immediately disagreed. I refused to go and apply for the permit, though I didn't try to stop him from applying for the permit himself (usually I'm the one who applies for permits there). My reason was that it's so crowded in Chinatown. When we previously had activities, and blocked the street, some drivers got angry, and even cursed at as. So my first thought was, "I don't want people in Chinatown to curse at us because we are blocking their way." I also offered the excuse that we didn't have enough time (we had less than a few weeks), and that we shouldn't bother to apply because the police would not give us the permit anyways. I knew that I had the attachment of fear. This attachment had always been there. When the CCP first started persecuting Falun Gong, I pushed a baby carriage and clarified truth to every door in Chinatown. Once someone drove me out of the place while cursing at me. I was so sad that I cried on the street. Since then, the attachment of fear--and the attachment of not wanting to talk to Chinese people had always been there. Although I've spent effort in eliminating and negating it, it was always there. Many times I showed the appearance of clarifying the truth in Chinatown, but that was only because many other practitioners were there and I didn't feel much emotion. I then studied Master's poem "For the Good of the World,"

For the Good of the World

Make clear the truth,
and drive off foul spirits.
Spread widely the Nine Commentaries,
and the wicked Party shall fade.
With righteous thoughts,
save the world's people.
I just don't believe their consciences
are irretrievably lost.

I deeply felt the the great importance and urgency of clarifying the truth to the Chinese people. This poem was composed in Philadelphia, and I thought that this could not just be a coincidence. But I just could not generate the compassion.

The western practitioner was very firm, and went to apply for the permit himself. I could feel that he eagerly wanted to clarify the truth to the Chinese people in order to save them. He got the permit. Most of the Philadelphia practitioners participated in this activity. We all felt that it was our mission to save more people on the day of Master's birthday, and it was also what Master was waiting for us to do. There were so many practitioners, and the field was extremely good. All the activities went very smoothly.

Practitioners also passed out truth-clarification materials door to door, and many people happily accepted them. But because my mind wasn't as pure, I encountered a storekeeper who said that we were blocking the street, and that it was affecting her business. I didn't know what to say at the time. After I got home I began to think back. Why was it me who heard these kinds of words? We only blocked a small part of the street, so how could it affect her business? It's impossible. People were just coming as usual, and because of our activities, even more people were attracted there. Also our Dafa practitioners were eating and making purchases in the restaurants and shops around there, so it could only bring more business to Chinatown. When I understood this, my mind was suddenly cleared up. We are indeed doing the most sacred thing. All people are here for the Fa, and we are here just to bring them the Fa.

After the activities, we all felt that the day was very meaningful. We planned to hold this kind of large-scale truth-clarification activity again at the same place. I'm really thankful to this western practitioner for his suggestion and effort. His compassion for saving sentient beings has made me realize my shortcomings and distance from him.

Please kindly point out anything inappropriate.

“I Am One of the "Flowers Blooming Everywhere"”