(Clearwisdom.net) June 2, 2007, marked the 100th annual Rose Festival, which is the biggest festival in Portland. This year, Falun Gong practitioners took part in the Rose Festival parade and won an award. 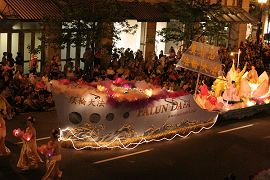 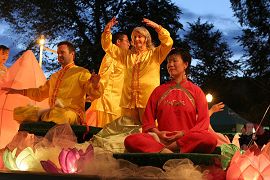 The parade started after dark. The Falun Gong loat, celestial maidens' dancing, and exercise demonstration manifested the beauty of Falun Dafa to the crowds. The spectators applauded the practitioners, and many people took informational materials. Some wanted to learn the exercises. 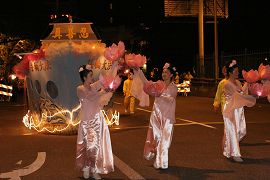 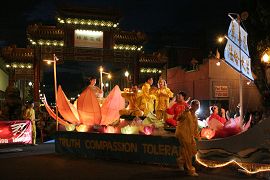 Before the parade, practitioners handed out materials to the bystanders and clarified the facts of the brutal persecution. A group of Indian businessmen asked practitioners many questions about Falun Gong, and some Western people learned the exercises from practitioners.

The judges of the parade also learned the facts of Falun Gong from practitioners. They praised practitioners for their courage and encouraged them to persevere.

Falun Gong practitioners were honored with the third place award in the parade.

“Turkey: The Deputy Secretary General and Coordinator of the Executive Board of the National Olympic Committee of Turkey Pays Attention to the Persecution of Falun Gong (Photos)”

“Queensland, Australia: Exposing the Persecution in China at a Multicultural Concert (Photos)”