(Clearwisdom.net) On June 9, 2007, several hundred New Yorkers held a rally in Brooklyn's Chinatown to support 23 million Chinese people quitting from the CCP and its affiliated organizations. 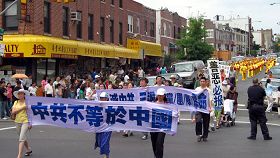 "The CCP is not the same as China" 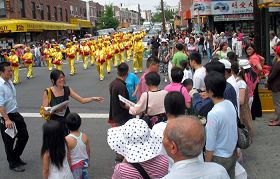 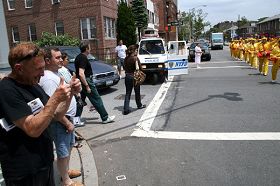 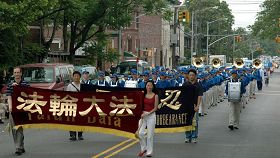 The Divine Land Marching Band at the rally

The host, Dr. Tianxiao Li, said in the opening remarks that 23 million Chinese people have quit the CCP and its affiliated organizations, and have made clear their stand. He also said that this was an indication of the CCP's demise, and thanked the people from all walks of life in New York for participating in the rally.

Dr. Damon Noto from Doctors against Organ Harvesting said that he was pleased to support the 23 million Chinese people quitting the CCP, which reminded him of those who opposed Hitler during World War II" it seemed like a foolhardy stance at the time, but history will look back upon them as heroes.

Dr. Noto discussed the CCP's atrocities of organ harvesting from living Falun Gong practitioners for profit. More and more people, including medical professionals, in Europe, North America and Africa are paying attention to and investigating these crimes.

The Divine Land Marching Band participated in the parade. Led by large banners with the words "Falun Dafa" and "Truthfulness-Compassion-Tolerance" on them, the band played "Falun Dafa is good" and "Drums and Trumpets Shake the Ten Directions". The performance of the waist drum team demonstrated the grace of Chinese traditional culture. Children especially enjoyed the dragon and lion dance.

Brooklyn resident Raymon Amoscato, whose family is from Poland, said that though his family has lived in Brooklyn for generations now, he was well aware of the Communist Party's wicked deeds in Poland and other countries. Brooklyn pastor Gerard Valdivia expressed that he would pray for the Chinese people and his hope that the Chinese people would soon be free of the CCP's tyranny.

“Two Practitioners Died as a Result of Persecution in Jinzhou City, Liaoning Province”