On June 2, 2007, the Finnish Service Centre for Quitting the CCP held an activity in the town center to express support for more than 22 million Chinese quitting the Chinese Communist Party (CCP). 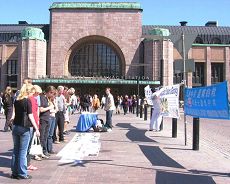 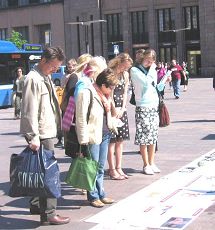 Stopping to read the banners carefully

The practitioners displayed several banners reading, "Heaven will extinguish the CCP; Quit the CCP to save yourself; To express support for 22 million brave withdrawals from the CCP," "The evil spectre of the CCP has been uprooted," "Condemning the CCP's harvesting of Falun Gong practitioners' organs for profit and cremating the bodies to hide the evidence," and other messages to clarify the truth. There were also pictures depicting the persecution of the Chinese people after the CCP took power, as well as the persecution of Falun Gong practitioners.

Ms. Jiang, a Falun Gong practitioner, said that today was the same day that 89,000 Finnish high school graduates had their graduation ceremony. There were a lot of passers-by outside the central railway station, some carrying fresh flowers and presents from relatives and friends. But many of them stopped when they saw these striking banners, or accepted a flyer. They started to carefully read the banners, ponder over the banners' messages, and some signed their names to support the brave people who have abandoned the CCP. Many condemned the CCP's persecution of Falun Gong. A Finnish woman said, "The communist party is very bad. The people should have human rights. You are doing what is right." 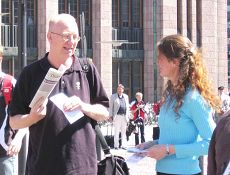 This gentleman is pleased to accept the Nine Commentaries in English 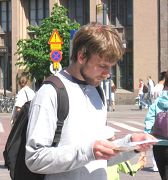 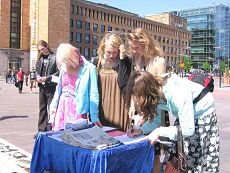 Ms. Jiang added that since the Nine Commentaries on the Communist Party were published, many Chinese people are awakening. At present, there is a large number of people resigning daily from the party and from the Communist Youth League. She said that people in the mainland are getting rid of their fear of the CCP, and many of them have started using their real names to quit the CCP. But the evil CCP is still putting up its last ditch struggle. It can be seen on Clearwisdom.net that the illegal arrest and killing of Falun Gong practitioners is still going on and getting worse every day.

A Finnish gentleman said, "I like China very much, but do not like the communist party." When a practitioner gave him the English version of the Nine Commentaries, he was very happy to receive it.

When a practitioner handed a flyer which exposed the CCP's evil essence to a Finnish gentleman, the man said, "I am doing business in China, I do not dare to read it. I am afraid." The practitioner said, "The more you are frightened, the more you should read it, and the more you must understand the truth. Twenty-two million Chinese have made it possible for you."

All the Chinese people passing by on that day accepted the Epoch Times newspaper's editorial, the Nine Commentaries on the Communist Party along with a special issue about the 20 million withdrawals from the CCP.