Practitioners from the capital city of Ukraine made use of a recent three day vacation to go to western Ukraine to promote Falun Gong, tell the facts about the Chinese Communist Party (CCP)'s brutal persecution of Falun Gong in China, and expose the evil nature of the CCP. They visited four cities. Western Ukraine suffered a genocide and many cultural treasures were destroyed under the tyranny of the Soviet government. As a result, people there detest the Communist Party and Communism. All the statues and mementos symbolizing communism were eradicated by the people here immediately after the disintegration of the Soviet Union. When people heard that Falun Gong practitioners suffer persecution under the rule of the CCP, they expressed intense indignation, and told our practitioners that the CCP is doomed to perish sooner or later because it's rule is only capable of violence and terror and hurting people. 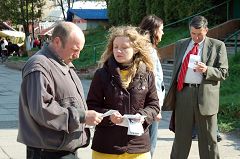 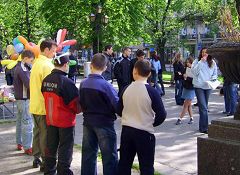 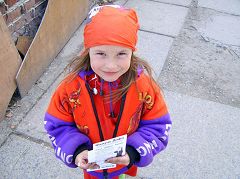 Wherever practitioners held activities, many children came to help hand out leaflets. When the practitioners left, the children all were reluctant to part and asked us when we would come back again. One little girl cried and said that she didn't know the reason, but she was extremely happy to be with us.

An unusual thing happened. A fellow practitioner had to go to another city and we agreed to meet again at the final stop of our trip, the city of Lviv. On the train on the way to Lviv, the practitioner came across another practitioner who has cultivated for many years but could seldom see other practitioners because she lived so far from others. They happily shared cultivation experiences with each other. A man in his 60's beside them asked, "Can I interrupt your conversation? I have a question to ask you." The practitioner said, "Of course, please ask." "The Falun Dafa you are talking about, is the one mentioned in this leaflet?" The man took out a leaflet from his pocket, which was the same one practitioners were distributing on this trip. "Yes, it is!" the practitioner answered. The man asked, "How many countries has Falun Dafa spread to? Do you hold activities frequently?" "Falun Dafa has spread to over 80 countries. Yes, we often hold activities at different places." The man said happily, "That's it!" and he added: "My grandfather once told me that in the future there will be a strength from China to save the whole world, save humanity, and they will hold activities in different countries." The train arrived at the man's stop, so he had to leave and said happily "See you. All the best to you."