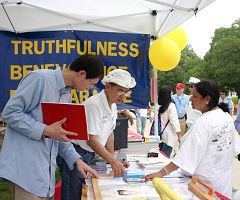 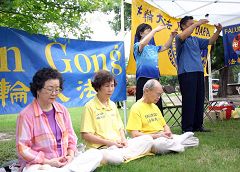 Falun Gong exercises are easy to learn, and suitable for people of all ages 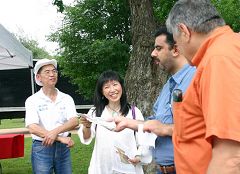 I want to learn more about Falun Gong

From 1:00 p.m. to 6:00 p.m. on Sunday, May 6, 2007, the Asia/Pacific American Heritage Festival took place at famous Hermnn Park in downtown Houston. Houston is a multi-cultural city, and the annual Asia/Pacific American Heritage Festival has become a well-known festival there. Several dozen groups as well as business people from different countries participated in this celebration, including the Falun Gong group and NTDTV. The goal of the festival is to share and exchange diversified traditional cultures of different ethnic groups.

Early summer in Houston is cool and comfortable. Citizens came to the park in a steady stream and walked around in high spirits. Among the numerous booths, the Falun Gong booth was especially appealing. One Falun Gong practitioner introduced a woman working in a nearby booth to the CCP harvesting of organs from living Falun Gong practitioners. The woman was startled upon hearing about it, and asked anxiously where and when it took place. The practitioner replied that it is happening in China right now. The woman said solemnly, "Too cruel!"

An older Chinese man read the truth clarification materials at the Falun Gong booth, started walking away, and then turned around and came back. "I have experienced all kinds of political movements that the CCP launched in China, and I have a deep understanding of the CCP's wicked nature. I want to bring a copy of the Nine Commentaries on the Communist Party back home to let my grandchildren learn about it," he said.

Some tourists showed great interest in Falun Gong, watching the video of exercise instructions for a long time. Some tourists asked where to learn Falun Gong; others looked at the words "Truthfulness-Compassion-Forbearance" on the banner and pondered it.

“An Incredible Hour Motivating Me to Cultivate More Diligently”