Finland: Practitioners Help a Chinese Student Appeal for the Rescue of Her Father Who Suffers Persecution in China (Photos)

(Clearwisdom.net) "What can I do? What has the Finnish government done?" These questions are often heard when Finnish Falun Gong practitioners raise awareness outside the central railway station. On April 28, 2007, the practitioners set up a display at the railway station to tell people about the eight-year cruel persecution that the CCP (Chinese Communist Party) inflicted on Falun Gong practitioners. They also appealed to the Finnish government and people to help to help rescue Zhang Weijie, father of a Chinese student in Finland, a young woman named Sunny. Sunny's father was illegally arrested by the Wuhan 610 Office one month ago. Practitioners asked the people to help send a letter to the Finnish president and parliament members to ask them to rescue Sunny's father. After carefully reading the details about this issue and the letter appealing for help, they signed the letter and said they would mail them immediately. Some even asked for more letters, so that they could ask their friends and relatives to participate as well. Sunny thanked them sincerely. 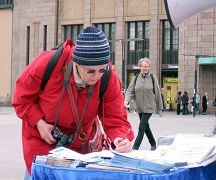 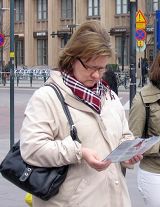 During the activity, after reading the banners, six or seven young Dutch people asked Sunny what is Falun Gong, and why does the CCP persecute Falun Gong? Isn't it that Falun Gong is causing a revolution? And then Sunny told them that her father became healthier and the family became happy, after he practiced Falun Gong; he did not care about politics. However, the evil CCP can't bear this group of good people who believe in Truthfulness, Compassion, Forbearance. In the persecution more than 3000 Falun Gong practitioners lost their lives, and there are more unknown practitioners who were cremated to eliminate the evidence after their organs were harvested. She said her father disappeared more than one month ago. Her mother went everywhere to ask for help, but still could not find him. Every now and then, the horrible scene of organ harvesting haunts this mother and daughter. One young man standing in the front said to his friends, "All of us will sign." Then there was a long line waiting to sign in front of the table.

People listened to the explanation, read the banners, went to the table to sign, and encouraged the practitioners to keep raising awareness. This persecution is not only horrible for Chinese people, but for the people all around the world. Compassionate people knew that they must not ignore what is happening, so they signed to support immediately.

“RFA: The US Commission on International Religious Freedom Re-designated China as a "County of Particular Concern"”