(Clearwisdom.net) The second trial of Wang Bo and her parents from Shijiazhuang City, Hebei Province commenced at the Shijiazhuang Intermediate Court at 8:30 a.m. on April 27, 2007 and ended at around 1:40 p.m. Five lawyers, Li Heping, Li Xiongbing, Zhang Lihui, Li Shunzhang, and Wu Hongwei defended the Wang family's innocence based on the constitution of China which guarantees freedom of belief and human rights. They made statements from the legislative aspect, from the judicial process and those pertaining to legal facts. Lawyer Teng Biao audited the trial. 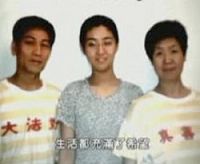 Wang Bo and her parents

The five lawyers were up against tremendous pressure from the Communist regime as they systematically and thoroughly defended three Falun Gong practitioners from various angles. History has recorded their courageous act. The five lawyers utilized their expertise and received wide praise for their courage and wisdom, breadth of spirit and professional knowledge.

1. The Communist Party claims a public trial but police arrested people from the audit seats inside the courtroom

Prior to the trial proceedings, the courthouse was heavily guarded, starting at 8:00 a.m. on April 27, 2007. Security officers stood inside, while regular police and riot police stood outside the gate. Numerous police officers inspected passersby the day before the trial.

The judge told the lawyers that Wang Bo and her parents' case would be tried publicly. Anyone bringing an ID and residence permit was said to be allowed to register for an audit permit the morning of April 26. Overall, 27 people, including some Falun Gong practitioners, applied and received audit permits in line with the judge's requirements. On the afternoon of the same day of the registration, however, all Falun Gong practitioners who had registered for audit permits were harassed. Officials from the Shijiazhuang City National Security Bureau, from the Shijiazhuang City Police Department, from local police stations and also from the Residential Committees went to these Falun Gong practitioners' homes and threatened them, threatening them not to attend the trial. They stated it was "an order from above." They also intimidated the practitioners' families and tried to get them to stop the practitioners from attending the trial. Some practitioners had their personal freedom curtailed.

Around 8:10 a.m. on April 27, people with audit permits started entering the courtroom. Judge Wei Suzhen (female) who was sitting in the audience went out into the hallway and shouted at the security officers, "Why did you let so many people in? What are the cops doing outside?" Soon, three female Falun Gong practitioners were arrested and driven away in a car. Among them, one practitioner protested the illegal arrest in broad daylight and another practitioner shouted, "Falun Dafa is good!"

The defense lawyers confronted the judge asking, "Isn't this a public trial? Why don't you let all 27 people in who received audit permits? How come only these few people are here? Why did you order the arrest of members of the audience?" The judge could not answer and reluctantly let in a few more people. Altogether eight of Wang Bo's relatives were allowed inside the courtroom.

A number of judges and government officials sat in the audience, as well as some police officers who had arrived late. Reporters from the Shijiazhuang City TV Station videotaped the whole process. This is what the Communist Party calls "a public trial."

The arrested members of the audience were released at the conclusion of the trial, but we do not know if all of them were released.

Three police cars took Wang Bo and her parents to and from the courthouse. No less than 600 police officers guarded the area. Martial law was imposed on the entire street in front the courthouse; two rows of police stood on both sides of the sidewalk and in the fast lane. After the three police cars passed, officials from the Shijiazhuang City National Security Bureau arrested Falun Gong practitioner Wu Lei for taking photographs. He was not released.

Due to pressure from the international community and with the voices of outspoken and courageous people, the wicked Party amended the second trial from a secretive process to an "open trial," but in reality staged this farce as described above.

2. Defense lawyers make excellent arguments based on the facts

Wang Bo's lawyer Li Heping pronounced a joint defense statement titled "Based on the Constitution, Belief is Not a Crime" in which the six lawyers (including Lawyer Teng Biao) quoted details and facts as well as historic cases that involved various aspects of the law. Mr. Li Heping wore a lawyer's robe, exuded confidence and fervently presented the statement. The judge rudely cut him off and threatened him many times, but Li Heping's defense was not affected.

Public prosecutor Yue Kunlun from the Shijiazhuang Intermediate Procuratorate made many rudimentary mistakes in his questioning remarks and threatened the defense lawyers and blasphemed the law on numerous occasions.

Wang Bo and her mother Liu Shuqin protested in the court without concerning their own safety, "You must not threaten our lawyers!"

The lawyers laid out the facts and made a comprehensive defense based on the inappropriate application of law, lack of facts and evidence, and wrong judicial procedures. Lawyer Wu Hongwei especially made his defense from aspects of both legal principle and human sentiment mentioning that Liu Shuqin was deprived of warm clothing in the winter.

The judge interrupted the lawyers' statement constantly and kept telling the lawyers to "keep it short and concise."

During this second trial, Wang Bo, along with her father Wang Xinzhong and mother Liu Shuqin, recounted the crimes committed against them by the preliminary trial judge and police officers. Although all three of them were tortured, intimidated and subjected to physical abuse to different degrees to extort confession, they still persisted in their belief and resisted the persecution. They acted with the high moral standards reflective of Falun Gong practitioners.

Public prosecutor Yue Kunlun from the Shijiazhuang Intermediate Procuratorate provided "evidence." He tried to play VCDs ransacked from Wang Bo's home, but he failed after several attempts. Eventually he was able to play one VCD that showed professor Xin Haonian illustrating Chinese history with background scenes of the Long River, the Yellow River and the meandering Great Wall.

The defense lawyer kindly reminded the public prosecutor to play more VCDs, but the prosecutor only played one VCD out of the 26 confiscated VCDs, and it took a long time. He could not play the so-called evidence used to incriminate Wang Bo and her parents, even at the end.

Lawyer Teng Biao did not participate in the defense because of pressure from the communist officials in the regime. He went to audit the trial out of friendship with the other lawyers, and because he felt sorry for the Wang family. After the trial, the judge started a quarrel with lawyer Li Heping and the other lawyers. Teng Biao was worried about his friends' safety and waited for them to leave together. A group of court police approached Teng Biao and started beating him in the presence of everyone. They did not give him any chance to explain his intention. They violently shoved and beat him to the ground four times, all the way from inside the courtroom to the outside. Four security officers grabbed Teng Biao's arms and legs and lifted him in the air. They tossed him on the pavement outside the courthouse, and swaggered away.

Lawyer Teng Biao wore eyeglasses and a suit. He repeatedly emphasized that he was a lawyer. Members of the public kept shouting, trying to prevent the evildoing police from beating him, but the police refused the protest and acted barbarically.

Two court police officers around 20 years of age beat and kicked lawyer Teng Biao until his suit was covered in dust. The larger part of one of his suit sleeves was torn, and his personal belongings were gone. It was said that a good-natured person argued with the police and managed to get the lawyer's computer bag back.

Lawyer Teng Biao has a Ph.D. degree in law. He is a renowned scholar and a professor at China University of Political Science and Law. He once wrote to the National People's Congress and requested removal of the Shelter and Repatriation System. He was among the recipients of the title "Top Ten Persons of the Law" in 2003 and was presented with the International Activist Awards from The Gleitsman Program for Social Activism by The Gleitsman Foundation.

Close to the end of the trial, 600 riot control police emerged from inside the court. They stood in two rows and imposed martial law on the street facing the courthouse. There were also lots of security officers and plainclothes police inside and outside the court. The lawyers stepped out of the court. Falun Gong practitioners and other people squeezed through the riot police and shook hands with every lawyer, to greet and thank them.

It did actually happen - the second trial for Wang Bo and her parents commenced; the six Beijing lawyers were able to make it to the court, and the family's relatives were able to audit the trial. Although there was interference, pressure and persecution, the trial went through due legal procedures. All of it was achieved only through the effort and support from many, many people inside and outside China. It shows the Chinese people are awakening, and the Communist Party's rule of violence is losing its hold in people's minds.

Government agencies and individuals responsible for persecuting the Wang family:

“Xu Xiaochun of Jiayu, Hubei and Chen Zhiying of Tonghua, Jilin Died Due to Torture”

“Mr. Wang Jitao Died as the Result of Torture”