(Clearwisdom.net) On April 28, 2007, the World Taiji & Qigong Festival was held in Greenville, South Carolina. Five groups consisting of more than 100 people from South Carolina and Georgia attended the festival. Representatives of Falun Gong, as one of the biggest cultivation groups in the world, were also invited. 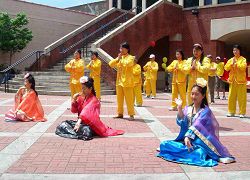 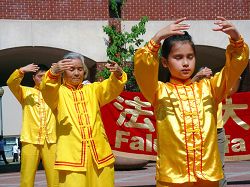 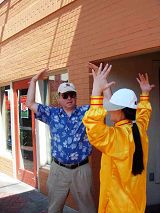 The festival was held at Bergamo Plaza. Falun Gong practitioners were the first and the last performers. They demonstrated the five sets exercises, which attracted many people.

Although the movements of Falun Gong are simple, they have immense energy. Many festival attendees were very sensitive and could feel the Falun Gong energy field. Some people could sense the peacefulness of the practitioners. After the demonstration, some people said that they wanted to learn Falun Gong and bought copies of Zhuan Falun.