(Clearwisdom.net) Emperor Kangxi (Aixinjueluo Xuanye, 1654-1722) was the second emperor of the Qing Dynasty who ruled over all of China. He lived a simple life. "I have two meals a day and nothing in between--no tobacco or liquor or betel nuts," he said. 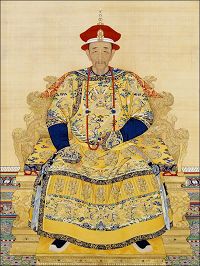 Many Chinese emperors longed for immortality and sought medicine and other means to attain everlasting life. On one occasion someone paid tribute to Emperor Kangxi by presenting him the book Secrets of Obtaining Elixir and Long Life. Kangxi refused to read it. He said, "Birth and death are part of the human condition. As Zhu Xi (1) said, 'Heaven and earth circle in turn, like that of day and night.' Confucius said to wait for death by living peacefully. These are the ways of the wise. Why fear death?" Kangxi also said, "I was not extraordinary when I was born. I had nothing exceptional after growing up."

Kangxi did not take tonics or have massages. In order to keep healthy, he followed, "A reasonable diet and good habits in daily life. That's it."

When he was 60, part of his mustache turned white. Some people suggested taking medicine to bring its color back. He declined, and said with a smile, "Not many emperors in history had white beards. What an engaging tale for generations if I have a white beard and white hair."

Emperor Kangxi reigned for 61 years. He lived in Changchun Garden, which was simply decorated. French missionary Jean Francois Gerbillon wrote in his diary, "(Kangxi) called us to his palace. The place is neither splendid nor majestic. It is furnished simply."

“A Practitioner's Husband Is Fearless in His Defense of Righteousness”

“The Path of Cultivation Only Becomes Smoother, More Effective, And More Efficient. ”