Governor Ernie Fletcher of the Commonwealth of Kentucky Proclaims May 13, 2007 as Falun Dafa Week in Kentucky

On May 10, 2007, Governor Ernie Fletcher of the Commonwealth of Kentucky proclaimed May 13, 2007 as Falun Dafa Week in Kentucky.

Governor of the Commonwealth of Kentucky

, Falun Dafa also known as Falun Gong, is a peaceful self-improvement practice rooted in ancient Chinese culture that consists of five gentle exercises including meditation and centers around the universal principles of Truthfulness, Compassion and Forbearance; and

, The teachings of Falun Dafa, through meditation and special cultivation, are perceived as an effective means of improving overall mental and physical health, as well as reducing stress; and

, Master Li Hongzhi, the founder of Falun Dafa, has helped hundreds of millions across the world improve their health and moral standards, as well as deepen their understanding of life, humanity and the universe, through the practice of Falun Dafa; and

, Transcending culture and racial boundaries, Falun Dafa has reached the lives of more than 100 million people in over 60 countries, including many people in the United States, of different ages, professions and racial backgrounds; and

, All Falun Dafa activities, including classes and practices, are offered by volunteers and are open to the public and free of charge; and

, The persecution of practitioners of Falun Dafa in China is an attack on basic human rights and should not be tolerated anywhere in the world;

, I, Ernie Fletcher, Governor of the Commonwealth of Kentucky, do hereby proclaim May 13, 2007, as

Done at the capital, in the city of Frankfort this 10th day of May, in the year of Our Lord Two Thousand Seven and in the 215th year of the Commonwealth. 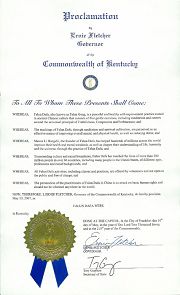 “Eliminating My Attachments When Clarifying the Truth to Family Members”