On the afternoon of May 25, Vancouver Falun Gong practitioners delivered a letter of appeal to Minister of Industry David Emerson, requesting the Minister not to invite human rights criminal Bo Xilai to visit Canada. 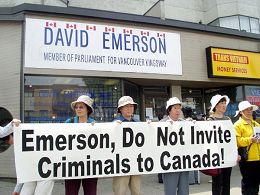 Practitioners appealed outside the office of the Minister of Industry and displayed a banner reading, "Emerson, Do Not Invite Criminals to Canada."

According to a recent survey, 75% of the Canadian people believe that the Federal Government should place human rights issues before commercial interests when dealing with Canada-China relations.

According to the World Organization to Investigate the Persecution of Falun Gong, during Bo Xilai's tenure as Liaoning Governor, Liaoning Province became one of the worst provinces for persecuting Falun Gong. To coerce practitioners to denounce their belief in Falun Gong, Bo invested billions, or more than 100 million dollars, to build up the prison infrastructure. In the notorious Masanjia Labor Camp alone, for example, he invested more than 60 million dollars to upgrade the camp. According to the Clearwisdom website database, at least 369 practitioners died in Liaoning Province because of the persecution.

On September 7, 2005, renowned Ottawa human rights lawyer Lawrence Greenspon submitted a civil lawsuit to the Ontario Supreme Court, charging Bo for torture. In the same month, the Falun Dafa Association of Canada appealed to the Canadian Government to deny entry to Bo Xilai and Xia Deren for their involvement in the persecution of Falun Gong. Due to mounting pressure, Bo and Xia were not able to visit Canada.

“Looking in the Mirror”