On May 24, several organizations, including Australia Quitting the CCP Service Center and Free China, organized a grand rally at Parliament Hill to support 22 million brave Chinese people who have quit the CCP and its affiliated organizations. Representatives of several rights groups spoke out to voice their support. 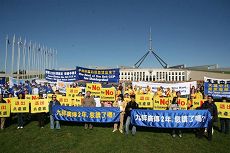 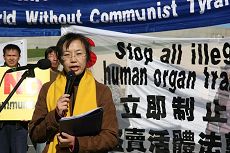 Ms. Zhong Ping, representative of the Quitting the CCP Service Center, said that more and more people have come to recognize the evil nature of the CCP since the publication of the Nine Commentaries on the Communist Party in October 2004. Today, more than 22 million Chinese people have quit the CCP and its affiliated organizations.

At the rally, a representative of the Coalition to Investigate the Persecution of Falun Gong told the audience that the Olympic Games should not be held in China while the CCP is brutally violating human rights. The representative stated that the coalition would unite global justice forces to boycott the 2008 Olympic Games if the CCP fails to give a satisfying response to the coalition before August 8, 2007.

Mr. Peter Westmore, president of the National Civic Council, sent a support letter to the rally. In the letter, Mr. Westmore stated that China has made no improvements in human rights and the Olympic Games will become a venue for the CCP to boost the illusion of its economic growth. 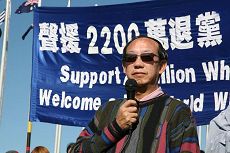 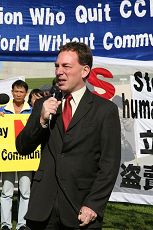 James Scott, from Tears of the Oppressed, at the rally

James Scott, from the Christian Human Rights group, "Tears of the Oppressed", condemned the CCP for its suppression of religious freedom. He believed that the CCP is pursuing commercial interests at the cost of human rights and people's dignity. He told the audience that the CCP's vow to develop its economy is just an empty lie within its systematic abuses of human rights. Another representative of the organization recounted a number of persecution cases of Chinese Christians, calling on the international community to pay close attention to human rights of spiritual groups in China.

Australian senators Natasha Stott Despoja, Bob Brown and Guy Barnett wrote letters of support to the rally respectively. In a letter, Senator Despoja said that the CCP must understand that respect for democracy, freedom and human rights is not a bargaining chip for it to maintain its rule. She said that the large scale withdrawals from the CCP are sending a strong message that the Chinese public is awaking.

Many tourists witnessed the rally

After the rally at the Parliament Hill, the group held another rally at the Chinese Embassy. Many Mainland tourists witnessed the event. Some of them smiled when they saw the rally, while some appeared to be shocked or puzzled. A considerable number of Chinese tourists quietly took photos of the site.