(Clearwisdom.net) The Divine Land Marching Band from Taiwan performed at tourist spots in Kuala Lumpur and caused a sensation. The marching band then came to Malacca on May 20, 2007, and wherever they went, they were warmly received and appreciated. The people were moved and amazed by their performances. 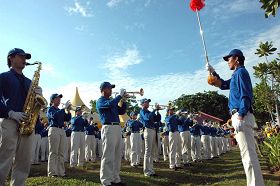 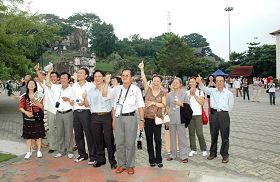 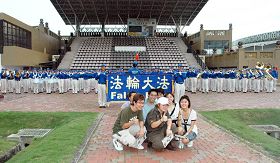 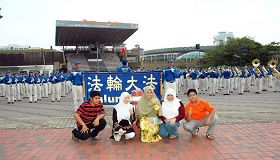 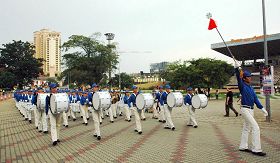 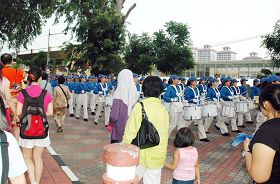 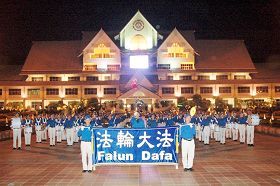 The Divine Land Marching Band performs at the last stop in Malacca--Malacca State Municipal Council Square. Their performance adds vigor and color to the brilliant night scene in Malacca

Tourists Gather to Watch the Performance and Extend High Praise

Malacca is a well known historical city, where there are many historical landmarks such as buildings, castles, churches and museums with unique characteristics. This year is "Visit Malaysia Year 2007". The Divine Land Marching Band presented exquisite performances, attracting tourists from different countries who took photos. Many people were attracted by the huge banner reading "Falun Dafa"and had a photo taken with the banner and the marching band while making thumbs-up gestures to express their appreciation for the band.

The music played by the Divine Land Marching Band was peaceful, solemn and dignified, permeating the entire A' Famosa. Many tourists gathered to watch, attracted by the music. A tour guide from Vietnam said in an interview, "The band performed so well and wonderfully! Just now I was on the hillside far away but was attracted by rounds of drum and trumpet music. I rushed here to see what was going on, and unexpectedly I found an outstanding band performing." The tour guide watched the wonderful performances and called the tourists to join him. Another coordinator of the tour also complimented the performance and hoped to see the band's wonderful performance next time when he came to Malacca. These tourists from Vietnam warmly cheered and applauded the band. Before leaving, they had a group photo taken with the banner "Falun Dafa" and the marching band.

Music is Full of Joy

Finally, the Divine Land Marching Band presented their last performance in Malacca at the Malacca Municipal Council Square, adding vigor and color to the brilliant night scene. Many vehicles passing by stopped to watch. Practitioners explained to people about Falun Dafa's wide spreading around the world and informed them of the persecution in China. When one man learned about the persecution of Falun Gong and practitioners' persevering resistance over the past eight years, he said emotionally that he admired practitioners' uncompromising spirit and perseverance for truth.

The Divine Land Marching Band concluded their trip to tourist sites in Malaysia amid applause and cheers. The joy will be remembered in people's hearts.

“New Mexico: Mayor Bob Forrest of the City of Carlsbad Proclaims May 13, 2007 as Falun Dafa Day”