The EU-China Bilateral Human Rights Dialogue was held on May 15 and 16, 2007 in Berlin, Germany. It was the 12th annual human rights dialogue since the first one held in 1996. The direction of the dialogues is an important topic of discussion since many politicians and non-governmental organizations have been appealing to hold open dialogues instead of the current closed-door ones, suggesting that the human rights dialogue be canceled if open dialogues cannot be held.

Since the first day of the dialogue was a closed-door session, no media appeared outside the German Foreign Ministry. Only Falun Gong's big banners hung across the road reminding dialogue participants that a peaceful cultivation group is still being cruelly persecuted by the Chinese Communist Party (CCP) and that living Falun Gong practitioners' organs are still being harvested for profit in China. 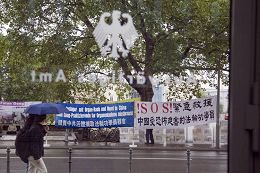 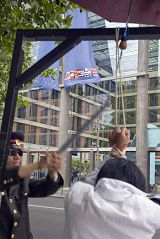 Vice President of the EU: "China

's human rights situation is regressing"At a press conference held in Brussels on May 10, Vice President of the European Parliament Edward McMillan-Scott mentioned that the CCP's human rights situation is regressing. He said, for example, that two Falun Gong practitioners Niu Jinping and Cao Dong were arrested right after they met with him when he was on a fact-finding mission in Beijing last year. Cao Dong was sentenced to five years in prison for meeting with Mr. McMillan-Scott. After Mr. McMillan-Scott went back to Europe, he talked with human rights attorney Gao Zhisheng via telephone. Afterwards, attorney Gao was also arrested and sentenced. He was abused during his illegal detention and is now under house arrest.

Niu Jinping's wife, Zhang Lianying, is still detained. Undergoing brutal persecution, she is now in the prison hospital and her life is in danger. Cao Dong has been sentenced to four years. He was forced to do slave labor and experienced cruel torture. Mr. Cao told Mr. Edward McMillan-Scott that the prison guards and prisoners have special torture methods with which to abuse Falun Gong practitioners. One of his best friends disappeared from the prison one night. Afterwards, Cao Dong saw his body with a hole in it, where his organs had been harvested. McMillan-Scott said, "The report of the two independent Canadian investigators concerning the live organ harvesting is absolutely reliable."

German human rights commissioner: "I will bring up the cases of Falun Gong practitioners"

Several days before the dialogue was held, in his letter to Ms. Lou Hongwei, the wife of imprisoned Dafa practitioner Bu Dongwei, Human Rights Commissioner for the German Foreign Ministry Mr. Gerberich wrote, "I am deeply concerned about Bu Dongwei's situation. During the human rights dialogue I will propose that the CCP release Bu immediately. We will not stop asking the CCP to respect human rights."

Bu Dongwei, 38 years old, is an office staff member of the Asia Foundation in Beijing. He was arrested from his home on May 19, 2006, but his family didn't receive a notice of his being sent to a labor camp from the Haidian Branch of the Beijing Public Security Bureau until August. Mr. Bu was sentenced to two and a half years in the labor camp under the false charge of "disturbing social order." He has been illegally imprisoned in Tuanhe Labor Camp in Beijing for nearly one year.

In addition, nearly ten European Parliament members (MEPs) sent letters to Mr. Bu's wife before the EU-China human rights dialogue to express their support. They said, "We have come to know about the difficult situation of Falun Gong practitioners in China. We will strongly condemn the Chinese government's actions against human rights. The MEPs who are concerned with the human rights condition in China are familiar with your husband's case. We will use all possible opportunities to request his release."

Before the human rights dialogue, Zhang Zhentong, a Falun Gong practitioner from Leipzig, Germany, also received the German government's commitment to make an effort to help his wife Wang Xiaoyan regain freedom. Wang Xiaoyan is now "illegally imprisoned" in the notorious Masanjia Labor Camp in Liaoning Province because she is a Falun Gong practitioner. Sources from the labor camp said that Ms. Wang has undergone cruel punishments including the "Hang Up," being force-fed with drugs that damage the central nervous system, and mental tortures. The torture known as "Hang Up" involves handcuffing a practitioner's hand to the ladder of an upper bunk bed and handcuffing the other hand to the head of the lower bed. Thus, the victim's arms are tightly stretched, with one in a high position and the other low, so that the victim cannot stand up nor squat down. Then the two legs are tied up. The torture itself is unbearable. Furthermore, during the brutal torture, the victim is not allowed to eat or go to the restroom. Ms. Wang Xiaoyan was tortured this way for a total of three days.

A week after the human rights dialogue, German president Koehler will visit China for three days. This will be the first time for Koehler to visit China since he took the post of president in July 2004. It will be an opportunity for the public to see the outcome of the closed-door EU-China Bilateral Human Rights Dialogue.

In a ceremony in which he received an honorary doctorate from Nanjing University in September 2003, in front of 800 attendees, the late Johannes Rau, former president of Germany, pointed out that the CCP government should give its people more freedom. He said, "People have recognized that such a large country as China cannot be ruled by an authoritative regime for a long time." He quoted what Confucius told his disciple about politics: "If a government is not trustworthy, its people cannot rely on it." Rau said, "Any country or regime which wants to succeed and bring welfare to its people needs the trust and support of its people."