On March 13, 1995, the first Falun Gong lectures started in a gym in Paris, France. This was Master's first stop in spreading the Fa overseas. The followings are precious memories from Falun Dafa practitioners in France. 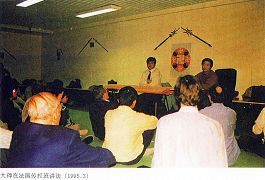 I was fortunate enough to be present for Master's lectures. I benefited from my parents, who had already begun practicing cultivation. My mother called me from China and told me about the upcoming lectures. After I arrived at the location, I verified the qigong master's name with the name my mother told me, and walked into the lobby.

I was expecting the Falun Gong master to be an old man with white hair, so when I saw Master for the first time, I could not believe my eyes. He was a middle-aged man and seemed to be only a little over 30 years-old. He had a great stature and was wearing a suit. He was handsome and his manner was elegant. His face was serious but kind.

The first day Master talked about how he was genuinely teaching qigong towards high levels, and that teaching qigong toward high levels is offering salvation to mankind. I was shocked. Throughout history only Jesus and Shakyamuni have offered salvation to mankind. Is he ... ? Gradually I was drawn to the content of Master's Fa lectures. They were quite profound and everything was new to me. I felt that it was very good. I clapped my hands very hard and hoped that Master would talk more, but Master said that since it had been nearly two hours, he needed to stop because some people's bodies would not be able to withstand it. I attended all of this lecture series.

At the time, the long and cold winter had just passed, and although it was early spring, it was still chilly. However, during the week that Master spread the Fa, the sun shined every day and the weather was very warm. It felt like a new life. From then on, every year at that time, Paris's weather has always been sunny and nice.

Back then my husband and I owned a store. My daughter's piano teacher saw a notice in a newspaper about the Falun Gong lectures, and she told us about it. We found the newspaper, and it was the day before the first day of the lectures. We were a little hesitant. Should we go? The lectures were starting at 7:30 p.m., but our store was supposed to close at 7:30 p.m. If we decided to go after we closed the store, we would be late. My nephew had some physical ailments. We had been looking at qigong as a possible cure, but we had also been deceived before. In the end we decided to go. We were just hoping to get lucky and we thought, in the worst case, we would just be fooled again.

That day we closed the store early. My husband was very familiar with the area around the lecture venue, but we encountered a lot of interference that day. We drove around for a long time, and when we finally got there, the lecture was already over, and Master was teaching the exercises. We followed along and did the exercises. My husband soon felt that his palms and body were getting hot, and it felt very good. On the way home, my husband said that this must be genuine qigong.

That same day my brother was also there. He asked Master whether Master could cure his son's disease. Master said that he doesn't treat diseases, but only cleans up the bodies of genuine cultivators. My brother was a little disappointed. Usually I'm the one that is reluctant, but that time I was very firm and persuaded my brother to keep going and finish attending all the lectures.

For many years I'd been searching for the meaning of life, but I couldn't find the answer. I went abroad to earn some money to give to my children, but I still felt there was something missing in my life. Master's lectures explained profound things in a simple way, and they made me understand the meaning of life and the real purpose of being human. After several days of listening to the Fa, my third eye opened. I was overjoyed and knew from then on that I was on the path of cultivation, and I must cultivate to the end.

It has been twelve years. Even today whenever I think about the moment when I obtained the Fa, I still feel full of happiness in my heart.

I was once interested in martial arts. When my friend invited me to go listen to the Falun Gong lectures, I thought that qigong and martial arts must have things in common, so I decided to go. When I practiced martial arts, all I did was practice and practice, but Master talked a lot and spent relatively little time teaching the exercises. Hearing the Fa day after day, I finally understood, in the last two days, what Master was telling us. He wants us to cultivate. "Cultivation" comes first, and "practice" comes second.

On the last day of the lectures, an older woman walked into the lecture room with the help of two walking sticks. After hearing Master's Fa, the woman threw away the walking sticks and walked out of the room on her own. If I did not see this with my own eyes, I wouldn't have believed it. The miraculous effect of Falun Gong won me over completely, and I was filled with admiration.